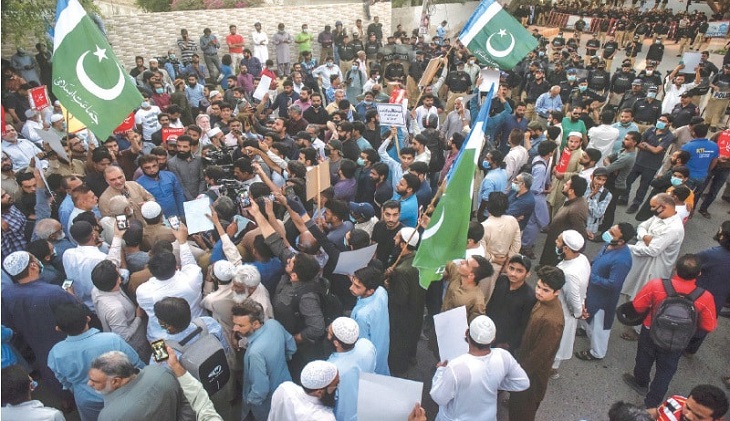 The rally was called by the Jamaat-i-Islami (JI) and led by its city chief Hafiz Naeem-ur-Rehman.

The protesters chanted slogans against the French president and castigated blasphemous caricatures in France.

They called for a boycott of all French products urged the government to call back Pakistan foreign mission in France and also ‘kick out’ the French ambassador in Islamabad.

They were chanting slogans against France and other European countries and termed France an “enemy of Muslims” saying the Pakistani nation was ready to sacrifice and never allow anyone to disgrace the holiness of the Prophet (PBUH).

They were also carrying banners inscribed with slogans ‘we will sacrifice everything for upholding holiness of our Prophet Muhammad (PBUH)’, etc.

The protesters marched towards the French consulate general and after reaching there they put on fire an effigy of the French president and also torn out his pictures.

Addressing the rally, Hafiz Naeem said: “It is a matter of great concern that rulers of the Muslim world cannot dare to condemn France and Europe and sending French missions back from their countries.”

“Every single Muslim in the whole Muslim world reveres the sacredness of Prophet Muhammad (PBUH) and always ready to defend his ‘Hurmat’ at all cost,” he remarked.

Later, MPA Syed Abdul Rasheed presented a memorandum to officials at the French consulate general calling upon the French president to apologise to the Muslim world on this heinous act.

Meanwhile, talking to the medai Hafiz Naeem said his party had planned to hold protest demonstrations across the country.

He announced that the JI would stage countrywide demonstrations to denounce the discreditable act on the appeal of JI emir Senator Siraj-ul-Haq on Oct 30 (tomorrow).

He further said that the JI would bring out a ‘Tahaffuz Namos-e-Risalat rally on M A Jinnah Road from Quaid-e-Azam mausoleum to Sea Breeze Plaza on Nov 1.

MPA Rasheed said on the occasion that Muslims all over world were united on a single platform to condemn the so-called right of expression.

He warned that no personnel of the French mission would be allowed to stay here anymore until an apology from the French president.

“Muslims are like a single soul and Muslim world is ready to sacrifice all things for dignity of Holy Prophet (PBUH),” he asserted.