The case of the Quran floating in the river: Saving holy books from CCP desecration 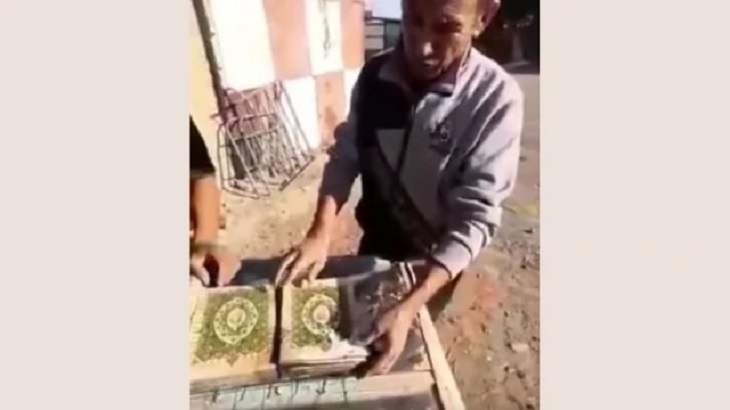 The Quran recovered in Aidarly.

Qurans are seized and burned in Xinjiang. In desperation, some put them in the Ili River, wrapped in plastic, hoping they will be recovered in Kazakhstan.

In a true story about the armed resistance in Lithuania against the Soviets, told by Canadian-Lithuanian novelist Antanas Šileika, a Catholic prayer book was found in 1945 floating in the river near the town of Merkinė. The anti-Communist partisans learned that it had been thrown in the water by three of their colleagues who had been ambushed and killed by the Soviets. They were not able to save themselves, but at least saved the prayer book from Communist desecration. The incident motivated the partisan to attack the Soviets in what became known as the battle of Merkinė.

As they say, a leopard cannot change its spot. The Communists continue to behave in the same way, and so do their opponents. Some days ago, in Kazakhstan, in the village of Aidarly, district of Panfilov, region of Almaty, a Quran in Arabic was found floating in the Ili River, wrapped in plastic. A Kazakh woman reported that, “The Quran that we had found in the Ili River was wrapped in transparent tape, placed in a plastic bag, and packed in a zippered bag. When we picked it up, the bag was soaked in water. I opened the bag and saw the Quran. We are ready to give the scriptures to any mosque that needs it.”

For Muslims, the Quran is much more than a book. It is a sacred symbol of their faith. Desecrating a copy of the Quran is one of the worst sacrileges one can perform, and an action odious and offensive to all Muslims.

“Since 2017, a Kazakh activist who works with refugees from Xinjiang told Bitter Winter, Xinjiang authorities have confiscated a large number of copies of the Quran and burned them. They have also burned other books in Arabic, Uyghur, and Kazakh languages, both religious and secular.” “Muslims who do not want their Qurans to be desecrated by the CCP keep them hidden at home, or bury them in the ground, she said. When the police is about to discover them, they carefully and respectfully wrap the Qurans in plastic and put them in the Ili River, which flows from the Ili Kazakh Autonomous Prefecture in Xinjiang to Kazakhstan, hoping they will be recovered in the latter country. Happily, this is what happened with the Quran found in Aidarly.”