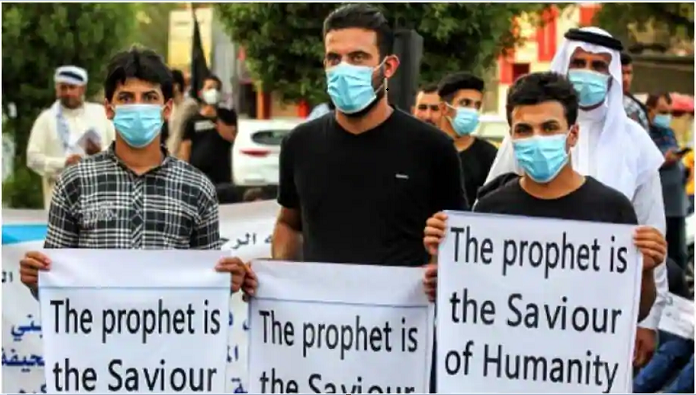 Amidst the widespread controversy that has erupted over the depiction of caricatures of Prophet Muhammad in France, a video of a TV series telecast on a Chinese state-run TV channel China Central Television (CCTV) has gone viral on the internet.

Arslan Hidayat, an Uyghur Rights Activist, took to Twitter share a video of a Chinese TV series that depicts a scene of an Arab ambassador visiting China during the rule of Tang dynasty. The Arab ambassador can be seen gifting a portrait of the Prophet Muhammad to the Chinese emperor.

According to Hidayat, the ambassador portrayed in the show says, “This is the portrait of the God of our country, Muhammad.”

The outrage against France also came after the solidarity movement that took place in France in support of French teacher Samuel Patty, who was beheaded for showing Charlie Hebdo cartoons to his students that picturised Prophet Muhammad.

Does depiction of Muhammad always been forbidden in Islam?

The video shared by Hidayat has now opened up a can of worms by igniting a series of debate on whether the depiction of Prophet Muhammad in the past was really blasphemous. With this particular Chinese TV scene becoming viral on the internet, various social media users are now pointing out that depiction of portraits of Prophet Muhammad was not forbidden in the past.

According to Prof Mona Siddiqui from Edinburgh University, there is no ruling in the Quran explicitly forbidding the depiction of the Prophet. Instead, the idea arose from the Hadiths – stories about the life and sayings of Muhammad gathered in the years after his death.

Siddiqui also points out that there are depictions of Muhammad, drawn by Muslim artists dating back to Mongol and Ottoman empires. In some of these paintings, Muhammad’s facial features are hidden, however, it is clear it is him. She added that the images were inspired by devotion, “The majority of people drew these pictures out of love and veneration, not intending idolatry.”

Experts believe that the images of Prophet Muhammad became a symbol of luxury items, which were intended only to be viewed privately, to avoid idolatry.

Following the terror attack on French teacher in Paris last week and the subsequent actions of the French residents to publicly display ‘blasphemous’ Charlie Hebdo cartoons, French President had reacted strongly against the Islamic terror attack and had also vowed that France would stick to its secular traditions and laws guaranteeing freedom of speech.

Days after the barbaric beheading of teacher Samuel Paty on the streets of Paris by a terrorist for showing the cartoons of Prophet Muhammad to his students, support poured in for the deceased teacher across the French communities who took to streets to condemn the killing of Samuel Paty.

The locals had projected huge images of Charlie Hebdo cartoons and the images of Samuel Paty on a local government building as a symbolic tribute to the deceased teacher.

Following the solidarity movement, many Islamic countries infuriated against the actions of French President Macron and the public had launched a campaign asking to boycott France. Turkey and Pakistan had taken the lead to denounce the French President and asked the Muslim world to isolate France and also demanded a boycott of products from France.

Will China be boycotted for picturisation of Prophet on TV series?

With Chinese TV series openly depicting Prophet Muhammad on TV series, netizens took to social media to wonder whether Muslim world will take a similar call to ban products from China and denounce Chinese President Xi Jinping. This when Chinese government’s treatment to and persecution of Uyghur Muslims has usually led to a silence from quite a few Muslim countries like Pakistan.