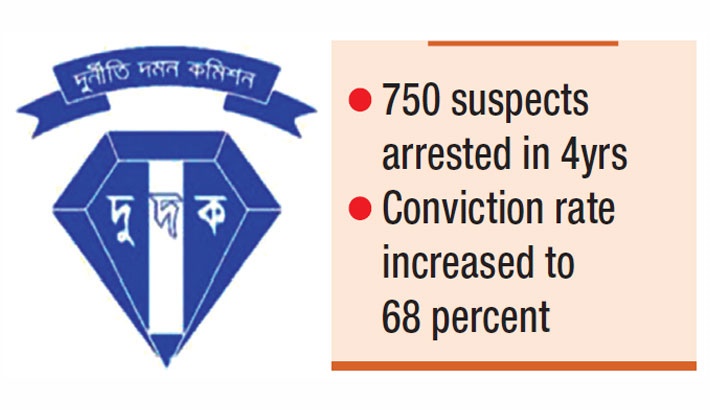 The fight launched by the Anti-Corruption Commission (ACC) against corruption in the country has gained pace over the last couple of years for its time-befitting initiatives.

The anti-graft watchdog has intensified drives against those who are involved in widespread corruption, including money laundering and amassment of illegal wealth.

Following a zero-tolerance policy on corruption, the three-member ACC, led by Iqbal Mahmood, has been working to bring the corrupt persons to book.

Talking to the Daily Sun, ACC Chairman Iqbal Mahmood said, “We’ll continue our drive until corruption is removed from every sector in the country and the drives will be more intensified in the coming days.”

When asked about the performance of the last four and a half years of the present commission, he said: “Our performance is visible.”

“We tried our level best to bring the corrupt persons to book regardless of their party affiliations while introduction of ACC hotline to receive allegations was a mentionable work in our tenure.”

“The setup of Satata Stores (integrity shops) in educational institutions to increase moral uprightness among schoolchildren and the formation of Satata Sangha (integrity units) to raise awareness about corruption were some of our activities worth mentioning.”

“We want to pass a clear message to the corrupt individuals that the ACC will not allow them to enjoy their illegal wealth, be it at home or abroad.”

After Iqbal Mahmood took charge in 2016 as the chairman of the commission, he started bringing the accused in graft cases to book.

The commission arrested a total of 750 persons in the last four years in connection with graft.

Amid the massive drives, those accused in graft are now being arrested or forced to surrender to the court, soon after the filing of cases against them, said an ACC top official.

According to the ACC, the submission of graft allegations has increased to a great extent over the last couple of years compared to those in the previous years as people’s confidence is back.

ACC also gave a special attention to conduct trep case to catch bribe takers at government offices across the country. At least, 68 officials were caught red-handed through setting up treps in the last four years.

Soon after taking the charge as chairman, Iqbal Mahmood took a five-year (2017-2022) work plan. As a part of the plan, the commission formed its own intelligence Unit, Wealth Management Unit, and Prevention unit.

As part of its capacity building, the ACC got the power to amend the rules to file cases at its own office without going to the police station. The commission has set up its own server for information technology and call records following the movements of suspected corrupt officials. Initiative was also taken to build up an efficient prosecution team and skilled human resources to deal with the graft cases.

The commission also started holding public hearings across the country to ensure hassle-free public services at the grassroots level.

Multi-dimensional activities including promotion and other incentives are being implemented at the commission with a view to encouraging its officials and employees for the best performance.

ACC formed 25 committees to find out sources of corruption at a number of graft-prone government offices including the health sector and education.

The anti-graft body also took initiatives to build up the ACC following the model of Federal Bureau of Intelligence (FBI) and Central Bureau of Investigation (CBI) to fight the graft.

It is now providing necessary training to its officials for carrying out investigation in graft cases following the styles of FBI of USA and CBI of India.

ACC is giving special focus on the training of its officials to increase their skills.

The commission is also providing training to around 1,000 officials and staff every year. At least 829 officials and employees took part in training in home and abroad only in 2019.

ACC in 2017 introduced its hotline ‘106’ to receive graft allegations which was an innovate idea of the ACC chairman. Now, anyone can submit allegation using the hotline number from any mobile operators free of cost. The commission received 1.47 lakh phone calls over the hotline ‘106’ in 2019 alone. Over 1,000 drives were carried out following the allegations received by the hotline last year.