US Election 2020: Trump and Biden duel in critical state of Florida 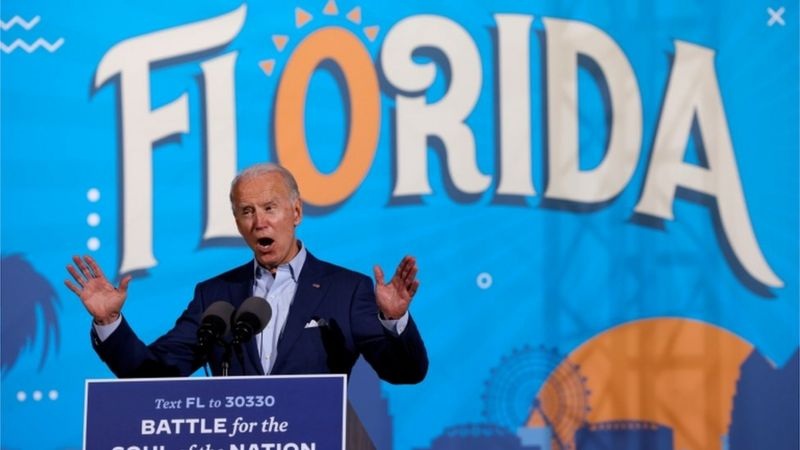 US President Donald Trump and his Democratic White House challenger Joe Biden have held duelling rallies in the critical election state of Florida.

Mr Biden told supporters: "You hold the power. If Florida goes blue [Democratic], it's over."

Celebrating soaring economic figures, Mr Trump, a Republican, said of his rival: "He's going to lock you down."

But his advantage looks less assured in the battleground states, such as Florida, that will decide who ultimately wins the White House.

More than 80 million people have already voted, 52 million of them by mail, setting the US on course for its highest electoral turnout rate in more than a century.

At Thursday's rally in Tampa, Mr Trump revelled in a new federal projection that the US economy expanded at an unprecedented 33.1% annual rate in the most recent quarter, following a record 31% contraction in the previous three months during the coronavirus crash.

Florida is a must-win for Mr Trump and a key opinion poll average shows him just 1.4 points behind Mr Biden, which amounts to a statistical dead heat.

At a 100-minute outdoor rally, Mr Trump told thousands of people, many of them crowded together without masks: "Joe Biden's plan is to deliver punishing [coronavirus] lockdowns. He's going to lock you down."