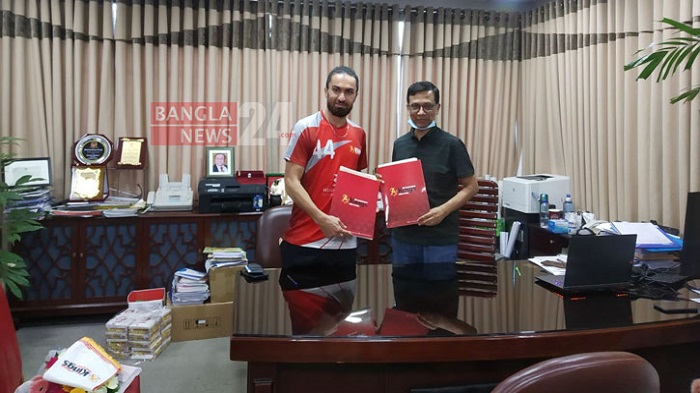 The club’s president and vice-president of Bangladesh Football Federation (BFF) Imrul Hassan signed the contracts on behalf of Kings in a signing ceremony, held in the Bashundhara Residential Area on Sunday.

“We were looking for a good defender to strengthen our defence. I have got many biodatas, but chose him [Khaled] because I feel he is more worthy than others. There is no need to test him observing his practices,” Imrul told the reporters during the programme.

“Bashundhara Kings are the best and most popular team in Bangladesh. Kings keep trust in me; now it is my responsibility to give them good in return. I will try to give trophies to Kings fans,” said Khaled Shafiei.

The 33-year-old Iranian defender, who has arrived in Dhaka on Saturday, joined the Bangladeshi side on a one-year contract from former Persian Gulf Pro League (PGPL) champions and former AFC Champions League runners-up Sepahan Sport Club. He is expected to arrive in Dhaka next month.

According to a website named ‘Transfermarkt’ claimed that the veteran Iranian defender joined Kings with the market value of euro 500 thousand or approximately Tk 50,20,7531.50.