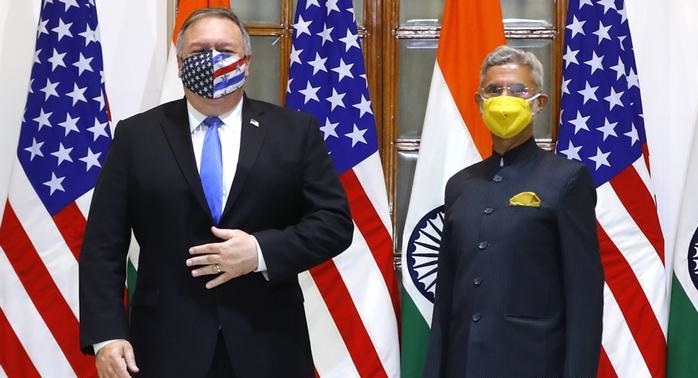 Rattled by US Secretary of State Mike Pompeo's strong support to India in its bid to win dispute with Beijing in Ladakh border, Chinese embassy in New Delhi asked Washington DC not to poke its nose.

The "boundary question is a bilateral matter" and there is "no space" for a third party to intervene. Interestingly, China has not criticised India in any manner,” it said in a statement issued Wednesday morning.

Mike Pompeo has said on Tuesday that USA "will stand with India as they confront threats to their sovereignty, liberty."

After talks with National Security Advisor Ajit Doval, in which the Ladakh confrontation was discussed, Mr Pompeo had said: "The US will stand with India in its efforts to defend its sovereignty and its liberty... Our nations are committed to working together into expanding our partnerships across many fronts."

Chinese Embassy in New Delhi in a long statement said the development of bilateral ties between countries should not "infringe upon legitimate rights and interests of a third party" and should be conducive to regional peace, stability and development.

"The boundary question is a bilateral matter between China and India. The two sides have  been discussing disengagement and de-escalation in the border areas through diplomatic  and military channels. China and India have the wisdom and ability to handle their  differences properly. There's no space for a third party to intervene," said a statement released by the Chinese Embassy.

China also accused the US of pitching an Indo-Pacific strategy to maintain its dominance.

"The 'Indo-Pacific strategy' proposed by the US is to stir up confrontation among different groups and blocs and to stoke geopolitical competition, in a bid to maintain the dominance of the US, organize closed and exclusive ideological cliques," its statement said.

Beijing hit out at what it called the "behaviour of engaging in unilateralism and bullying" and added: "By hyping up the so-called 'China threat', the US is in fact making pretexts for maintaining its global hegemony and containing China's development." It also said, "We urge the US side to respect facts and truth, abandon the cold war and the 'zero-sum'  mentality, stop hyping the so called "china –threat" and stop the wrong actions that  undermine the regional peace and stability.

Pompeo arrived in Delhi on Monday along with Defence Secretary Mark T Esper for the third edition of the US-India dialogue.

In July, Pompeo criticised China for its aggressive moves against its neighbours, including "instigating" a deadly confrontation with India in eastern Ladakh, saying Beijing cannot threaten countries and bully them in the Himalayas.