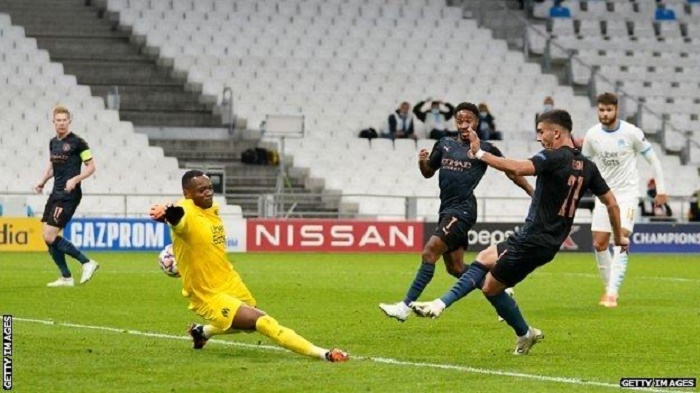 Manchester City continued their perfect start to the Champions League group stage with a comfortable victory at Marseille.

The visitors dominated from the outset, with Ferran Torres opening the scoring after Kevin de Bruyne got in behind the Marseille defence and squared for a tap-in.

Oleksandr Zinchenko clipped the outside of a post with a neat strike from the edge of the box as City pushed to get a second before half-time.

Marseille rarely troubled Ederson in the City goal. Nemanja Radonjic's speculative effort from 30 yards was easily saved, while Florian Thauvin hit the outside of a post after the break, although Ederson had it covered.

As the hosts tired, City stepped up a gear and wrapped up the win in style as Ilkay Gundogan stabbed in from Raheem Sterling's knockdown before Sterling tapped home from another De Bruyne assist.

Victory means City are top of Group C with six points from two games and on course for qualification to the knockout stage.

Their next Champions League game is at home to Olympiakos on Tuesday, 3 November.

No strikers? No problem

City have been unfortunate with injuries to their strikers this season, with Sergio Aguero this week joining Gabriel Jesus on the sidelines.

City have not had both first-choice forwards available for any of their nine games in all competitions, and on only four occasions have they had one fit striker.

It prompted manager Pep Guardiola to experiment against Marseille with winger Torres handed a central attacking role on his first start in the Champions League for the club, with Phil Foden and Sterling on either side.

The experiment paid off, the trio providing an energy in attack that the five-man Marseille defence struggled to deal with, while De Bruyne was once again pulling the strings from just behind the front three.

After Torres' goal, it took a while for City to put the game to bed, with the two late goals adding the gloss that their performance deserved.

While the loss of City's two main strikers is a blow, this game not only highlighted that they can still score goals in their absence but also further underlined the importance of De Bruyne.

City became more effective when he came off the bench in the 1-1 draw against West Ham in the Premier League on Saturday, and he was again the heartbeat of the side as he finished this game with two assists.

'We are improving' - what they said

Manchester City boss Pep Guardiola: "Sometimes we are not good enough and sometimes the players of the opposing team are better than us. That is life.

"Today, with the social media, when you lose you are a complete disaster. The important thing is for the club to be stable and the players to know what we are doing, where we come from, where we are struggling and be calm.

"It is important to start the Champions League with two victories. We are close now to being in the last 16 but still we are just in the beginning, improving."

Marseille coach Andre Villas-Boas: "It was a tough match to play and we paid for our mistakes, but we didn't defend too deep and my players were exceptional.

"The second goal was a real blow for us as we were starting to turn things around. In the first half, we had trouble getting through the City press, and a bad pass led to them being 1-0 up."