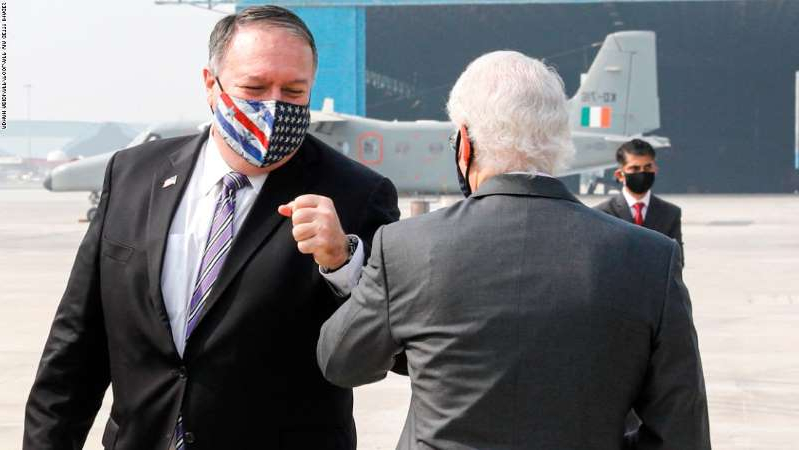 The United States and India have reaffirmed their defensive and security relationship, as Washington continues to rally allies in Asia amid concerns over increased Chinese military activity in the region.

In a meeting Monday in the Indian capital, US Secretary of Defense Mark Esper and his Indian counterpart Rajnath Singh discussed "military to military cooperation" and the upcoming Malabar naval exercises, according to a statement from the Indian defense ministry.

The statement also indicated that the two sides would sign the Basic Exchange and Cooperation Agreement (BECA) to enable greater geo-spatial information-sharing.

The Malabar drills, which will be held in the Indian Ocean next month, will feature all members of the Quad, an informal alliance of the US, India, Japan and Australia, which has been proposed by some as a potential "Asian NATO," intended to counterbalance Chinese military strength in the region.

In a meeting of the Quad earlier this month in Tokyo, US Secretary of State Mike Pompeo railed against the "Chinese Communist Party's coverup" in the initial stages of the coronavirus pandemic, and saying "it is more critical now than ever that we collaborate to protect our people and partners from the CCP's exploitation, corruption, and coercion."

Speaking to reporters after that meeting, a senior state department official said that "there's no avoiding the fact that it's China and its actions in the region that make the Quad actually matter and function this time around."

The official said a "sudden turn toward gross aggression by the Chinese Government in its entire periphery" had alarmed Beijing's regional neighbors, and pointed in particular to ongoing tensions between India and China over their shared border in the Himalayas.

Pompeo, who is also in Delhi this week, said in a statement ahead of the trip that the partnership between the US and India is "critical to the security and prosperity of both countries, the Indo-Pacific region, and the world."

"We are expanding cooperation between our two militaries. This includes our navies, which play a critical role in ensuring freedom of navigation in the Indo-Pacific," he said in a separate statement, adding that "the United States welcomes India's emergence as a leading regional and global power."

India has long attempted to balance relations with Washington and Beijing, with whom it shares a 2,100 mile-long (3,379 kilometer), hotly-disputed border. That boundary has been the site of major tensions this year, following a bloody clash between Indian and Chinese troops in June which left dozens of soldiers dead.

The signing of the BECA agreement, as indicated in the joint statement from the defense chiefs, would likely give New Delhi access to US geo-spatial intelligence, potentially improving the accuracy of Indian weapons systems along the frontier.

Last month, both India and China accused the other of trespassing across the de facto border, the Line of Actual Control (LAC), and attempts at deescalation have struggled, though on September 21 both sides agreed to stop sending more troops to the disputed area.

That attempt at deescalation has not stopped Chinese state media continuing to rail against India, however.