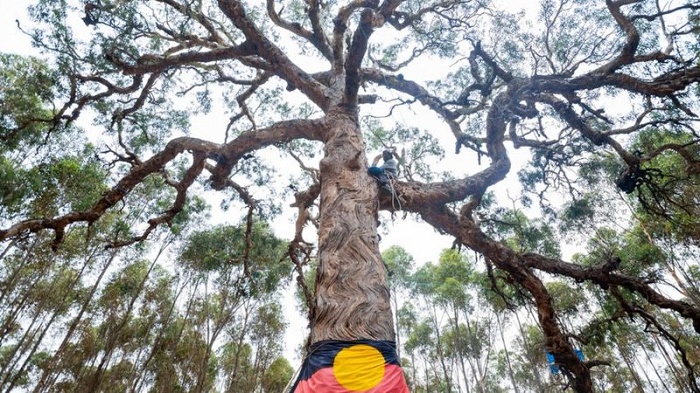 The bulldozing of a sacred tree for Aboriginal people to clear land for a highway has sparked anger in Australia.

Protesters have long camped at the site in Victoria to defend culturally significant trees, including some where local Djab Wurrung women have traditionally gone to give birth.

But state authorities cut down the Djab Wurrung "directions tree" on Monday, the activists said.

Officials defended the felling, saying the tree was not on a protection list.

In a deal last year, Aboriginal landowners negotiated with the Victorian government to save around a dozen of 250 "culturally significant" trees from destruction.

However, activists independent of the Aboriginal land group have remained at the site near Buangor to try and save more trees.

Authorities said the tree removed was a fiddleback and unlikely to pre-date British settlement in Australia, but protesters said it was in fact a yellow box species. They estimated it was 350 years old.

Many condemned the news of its destruction.

"Absolutely gutted and feel the pain of our ancestors right now," tweeted Lidia Thorpe, the first Aboriginal senator in state parliament and a Djab Wurrung woman.

Many Aboriginal people say the land is paramount to their identity. Djab Wurring activists have previously compared the cultural importance of trees in the area to a church or other spiritual place.

Among trees that will be protected are two "birthing" trees. These are centuries-old trees where women have also buried their placentas after giving birth, as part of a cultural tradition.

Critics were also angry at the timing of the destruction, noting it had coincided with the high-profile announcement of an end to lockdown in the state capital, Melbourne.

Victoria's government has staunchly defended the highway project - a 12km (7.4 miles) expansion of a road between Melbourne and Adelaide - arguing it will reduce traffic accidents.

"With more than 100 crashes on the Western Highway in recent years, including 11 deaths, we're getting on with this urgent safety upgrade that will save lives," it said in a statement.

It said it hadn't touched a separate tree identified as "directions tree" - which is protected - and suggested the activists' classification had differed from the land group's.

"We've listened to Aboriginal voices every step of the way," said a spokesman.

On Tuesday, authorities had closed sections of the highway to continue clearing the land, local media reported.

Due to the backlash, Rio Tinto's boss Jean-Sébastien Jacques announced he would step down.