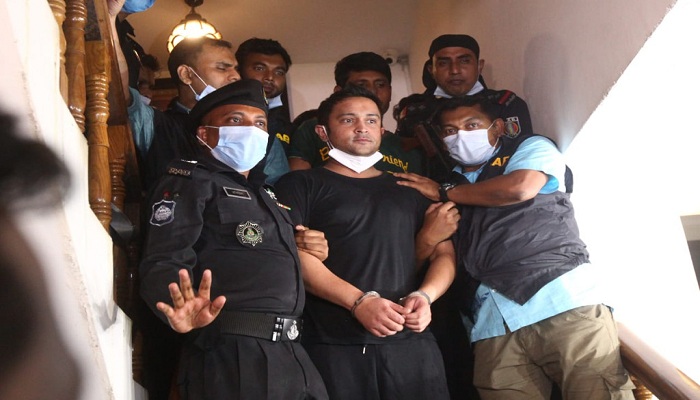 Erfan Salim, a councillor of Dhaka South City Corporation and son of lawmaker Haji Selim, made a lot of drama during arrest in a case for beating a Navy officer and his wife.

Although he along with his bodyguard and staffs injured a defence officer near Kalabagan intersection of Dhanmondi, he pretended to be innocent to the law enforcers.

When law enforcers led by a Magistrate went to his house in old part of Dhaka Monday, he wanted to know reason for presence of police.

Police found Salim to be drunken at the time of arrest.

An illegal firearm, wine, yaba and remote talking devices were recovered from his residence.

The law enforcers also detected a torture cell in the residence of the councillor.

Magistrate Sarwar Alam sentenced councillor Salim to imprisonment for 18 months on various counts. His bodyguard Zahid was also jailed for six months for abetting the crimes.

Salim was taken to Dhaka Central Jail in Keraniganj at early hours of Tuesday.

He is in a quarantine cell as part of corona safety measures.

After his arrest, locals are opening mouth and making various allegations.

Drunken Erfan flanked by 10 bodyguards and two dogs allegedly used to make movement in the area at night.

Meanwhile, state-owned Agrani Bank has reclaimed possession of a land which was illegally occupied by Haji Selim.

The land located at Moulvibazar in old part of Dhaka was grabbed by the lawmaker this year as the bank shifted its branch from a two-storey building to elsewhere.

The bank officials took possession of the land again on Monday.