Bringing Cricket Back on Large Scale

Ready to take up challenge: Papon 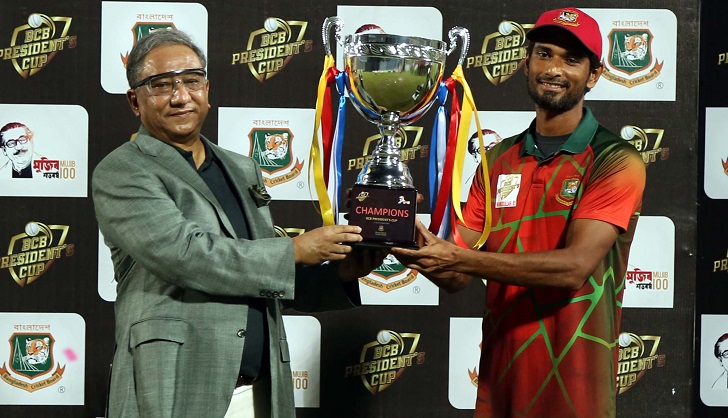 Bangladesh Cricket Board president Nazmul Hasan Papon said that they are ready to take up the challenge of bringing back cricket on a bigger scale after successfully completing the BCB President’s Cup on Sunday.

BCB President’s Cup, the first competitive cricket tournament, since the coronavirus pandemic, ended without any trouble as Mahmudullah XI clinched the championship after beating Nazmul XI by seven wickets at Sher-e-Bangla National Cricket Stadium in the capital.

BCB considered the three-team 50-over competition involving the top players of the country as a test-run before resuming domestic cricket on a larger scale as BCB is planning to bring cricket back to the field.

BCB now looks adamant to host the five-team T-20 tournament after successfully completing the President’s Cup under the new-normal environment that includes keeping the cricketers and the members of the team management under the bio-bubble by isolating them in a hotel during the entire tournament.

“The next stage is now we want to do a T20 tournament. It was a three-team tournament earlier and now there will be five teams. It will be challenging for us as well,” Papon told reporters after the prize giving ceremony.

“It will be difficult but we are taking up this challenge and hopefully it will start on November 15. We will give the details tomorrow. We will give an expression of interest as to who wants to be the sponsor for these five teams. We will fix it according to that,” he added.

“Bringing cricket back to the field was a big challenge. There was always a fear in mind that what would happen if a boy was contracted with coronavirus while going to this tournament and who will take the responsibility and for that we have maintained bio-bubble environment,” he said regarding launching the three-team 50-over tournament.

“The purpose is to bring us international cricket here and whether we can go and play outside because all countries will have the same rules (bio-bubble). We tried to provide them (cricketers and members of the team management) to adapt to these circumstances and the players have suffered throughout the tournament because they could not get out of the hotel floor with the coaching staff as well,” he said.

“If such a tournament is held outside the country, there will be a similar situation and so it was important to adapt,” he said.

BCB president said that they are not interested to go for international cricketers as most of them happen to be batsmen and that won’t suit their purpose eventually.

“We have decided that we will play with all the local players. With five teams, more local players will get a chance. 30 more will come to us,” he said.

Nazmul added that though they are planning to form the five teams like the way they did with the three-team tournament he added that he is not ruling out the possibility of a draft in the competition if the sponsors are keen to have it that way.

Many sponsors had reservations over participating in the tournament if BCB forms the team citing they won’t be sure whether they will be given the team of their choices.

“It will have sponsorship that is for sure. We are getting a lot of interested parties and most of them are new. Usually, those who do not get a chance in BPL they are showing interest considering who is playing in BPL are expected to feature in that competition,” he said.

“We are planning to form the team but if they (interested parties) want us to draft it can be done but with the corona condition I don't think anyone would want to do that,” he said adding that they will go for the lottery if interested teams are not ready to take the team they are expected to form for the tournament.

“We have two options one is the lottery and the other is if they say I want it and we manage to give a team of their choices. Otherwise, we will go to the lottery,” he said adding that Shakib Al Hasan, who is expected to be free to play competitive cricket from October 29 following his ban, confirmed his participation in the tournament.