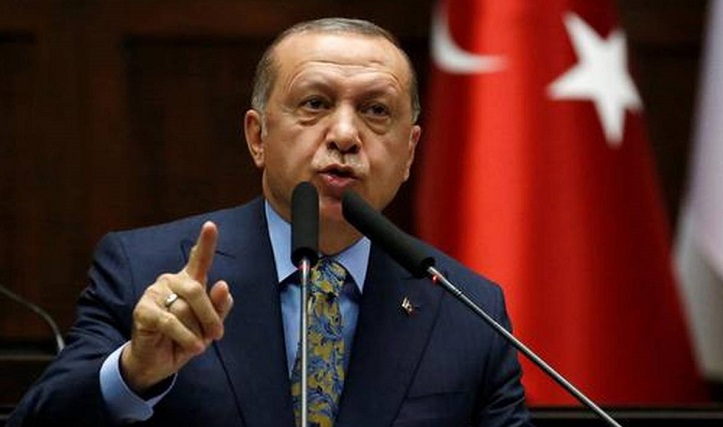 "As it has been said in France, 'don't buy Turkish-labelled goods', I call on my people here. Never give credit to French-labelled goods, don't buy them," Erdogan said during a televised speech in Ankara.

Boycotts of French goods are under way in supermarkets in Qatar and Kuwait, with further calls to spurn French products in Jordan and other states.

Erdogan's comments follow his call at the weekend for French President Emmanuel Macron to undergo mental checks, which led to Paris recalling its envoy to Ankara.

Ties between Turkey and the West have been tense following the 2016 failed overthrow of Erdogan.

But ties with France have been further strained in recent years over issues including Libya, Syria and Ankara's gas exploration in the eastern Mediterranean.

Erdogan and Macron have been at loggerheads in recent months especially over France's criticism of Turkey over Ankara's actions in the war-torn countries, and the conflict between Armenia and Azerbaijan over Nagorno-Karabakh.

But Ankara has been particularly angered by Macron's policies toward Muslims, after the French leader announced a plan earlier this month to "liberate Islam in France from foreign influences".

"European leaders should tell the French president to stop his hate campaign" against Muslims, Erdogan said.

Eighteen months before a presidential election in which Macron fears a challenge from the right, Macron said this month Islam was a religion "in crisis" around the world.

There has also been growing anger in the Muslim world against Macron after he vowed France would not give up cartoons depicting Prophet Mohamed following the murder of a French teacher outside his school outside Paris.

The teacher, Samuel Paty, was murdered after he had shown cartoons of the prophet during a class he was leading on free speech.

Visual representation of the prophet is strictly forbidden in Islam.

Erdogan also criticised the attacks on mosques in Germany and Australia. "I call on German Chancellor Angela Merkel. What about the freedom of belief you claimed to have there? What about the state protecting religion and the faithful?

"Have you heard such a thing in Turkey? No. Why? Because we have real freedom of religion. But they don't have this," he said at his presidential palace inaugurating a week of celebration for the Prophet Mohamed's birth.

He also accused some Western leaders of acting like fascists and pushing Islamophobia.

"You are in a real sense the links in the chain of Nazism," said Erdogan, without giving any names. "Muslims are now subjected to a lynch campaign similar to that against Jews in Europe before World War II."