Xitler: Activists campaign to shift the 2022 Winter Olympics away from China, pointing out how Hitler had used the 1936 games to promote himself 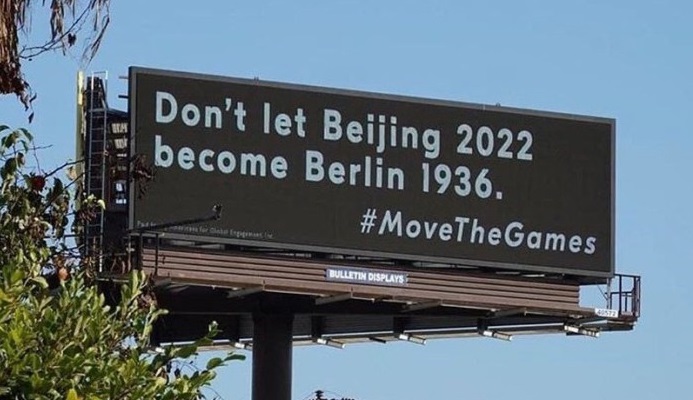 In 1936, Adolf Hitler-led Nazi Germany hosted (Summer) Olympics Games. It has been more than 80 years since the event took pr lace, but it is still believed to be one of the grossest usages of an International event for self-promotion. Though the games were designed to promote goodwill among the participating nations, Hitler turned it into a platform to spread propaganda to introduce the world to ‘new Germany.’ Some activists believe that Xi Jinping may use the Winter Olympics in 2022 scheduled to take place in Beijing in a similar manner.

Hashtag #MoveTheGames is trending on Twitter with an aim to urge the organizers to move the venue for Winter Olympics 2022 out of China. On 6th October, UK announced that it might boycott Winter Olympics 2022 if more evidence makes it clear that there has been a gross violation of the Human Rights of Uyghur Muslims in China. The foreign secretary Dominic Raab has said, “Generally speaking, my instinct is to separate sport from diplomacy and politics, but there comes the point when it is not possible.”

An increase in anti-China sentiments

There has been a sharp increase in anti-China sentiments across the globe over several issues. From using loans to take control of assets in developing countries to use its dominance in technology to spy on government officials across the globe, China has been accused of many wrongs, and the Covid-19 pandemic that originated from Wuhan in China made people lean towards boycotting Chinese products and services. India has banned 300+ Chinese apps and cancelled contracts with Chinese companies over increasing tension on the India-China border. The US has also launched a trade war against China, and several countries have banned Chinese telecom companies like Huwaei and ZTE in their upcoming 5G networks over espionage concerns.

If anyone has similarities with one of the most ruthless dictators of all times, then the responsible nations must take steps to avoid the spread of another worldwide plague of war. Benjamin Franklin once said that “Glass, China, and reputation are easily cracked and never well mended.” China has managed to use its global clout to buy out or copy the industrial and technological properties of other countries. In an attempt to prove itself a global power, China has ruthlessly tried to suppress voices that have been raised in opposition across the globe. Some critics believe that Jinping has surpassed Mao and now competes with Hitler.

Chinese Communist Party, under the leadership of Xi Jinping, has destroyed all traditions of the other pre-existing races of mainland China except the Han Chinese. The ancient cultures of Tibet, Turkic people, Uighur, Hui Manchus, Mongol, and Yi people are either completely extinct or on the verge of extinction. Hitler aimed to establish the ‘Aryan-race,’ that he believed to be the purest race, as the ruler of the world.

Horrifying stories of the concentration camps in Germany during the Holocaust are well-known, and in a similar way, Xi is allegedly using brute force to persecute Uighurs in concentration camps in Xinjiang. President Trump has accused China under Xi of being complicit in the rapid spread of COVID 19 across the world, resulting in the deaths of over a million people.

Many major manufacturers are exiting China and shifting their factories to more favourable nations. Countries like the US, India, UK, Sweden, and others have decided not to use Chinese 5G technology, irking China. Now, the voice against China being the host of the Winter Olympics will only increase China’s problems in the coming days.