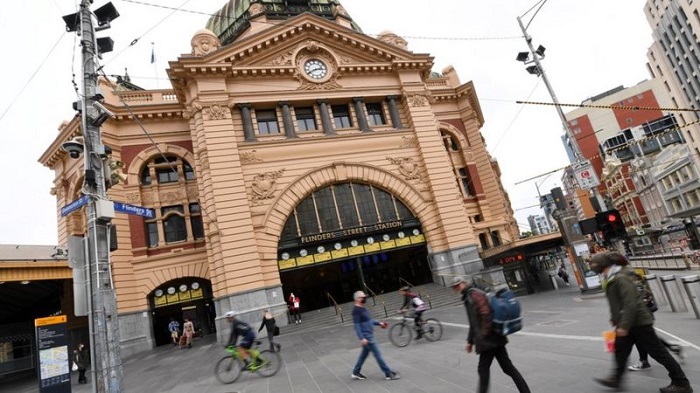 The Australian city of Melbourne will exit lockdown from Wednesday after recording no new Covid-19 cases for the first time since June.

Victoria state was the epicentre of Australia's second wave, accounting for more than 90% of its 905 deaths.

The state capital, Melbourne, went into lockdown 111 days ago - enforcing home confinement, travel restrictions and and closing stores and restaurants.

However on Monday, authorities said the city was ready to re-open.

"With zero cases and so much testing over the weekend... we are able to say that now is the time to open up," said Victorian Premier Daniel Andrews.

In July, Victoria saw cases surge to more than 700 per day but the severe stay-at-home rules and a curfew have brought the numbers down.

Mr Andrews praised the state's six million residents, saying: "Fundamentally, this belongs to every single Victorian who has followed the rules, stayed the course, worked with me and my team, to bring this second wave to an end."

As of 28 October, in Melbourne:

As of 8 November, in Melbourne:

Mr Andrews said the state was well placed for a "Covid-normal Christmas", but urged people to stay vigilant.

"We need to be proud today and optimistic and confident, but we also need to be COVID-19 safe," he said.

On Monday, state health officials reported no new infections for the first time since June, and no new deaths. Active cases stood at 91.

Locals celebrated the milestone and re-opening announcement with messages of joy and relief on social media.

Australia has adopted an approach of using lockdowns alongside proactive testing and tracing to contain the virus.

A nation of 25 million people, it has recorded about 27,500 infections - far fewer than many nations.

The state government put Melbourne into its second lockdown in early July after cases exceeded 100 cases per day. Infections peaked about a month later, before beginning to fall.

As the virus spread outside the city, stay-at-home restrictions were also imposed on the rest of the state.

But Melburnians endured the toughest measures including a night-time curfew, a one-hour limit on outdoor exercise, and a ban on travelling more than 5km (3.1 miles) from their home.

The heavily policed lockdown - one of the toughest in the world - had divided opinion among the city's residents and prompted small protests.

In recent weeks, many business owners and others had called for the state to re-open, but others had supported the premier's cautious approach.