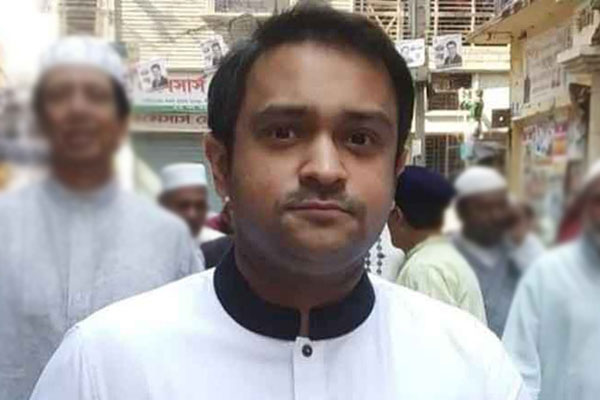 Rapid Action Battalion (RAB) has taken Irfan Salim, son of MP Haji Salim, and another person into custody in a case filed on charge of "attacking" Lt Wasif Ahmed Khan of Bangladesh Navy in Dhanmondi area of Dhaka on Sunday night.

The elite force detained Irfan, a councilor of ward 30 of Dhaka South City Corporation, in a drive conducted at Haji Salim's residence at Madina Tower in Lalbagh area of old Dhaka on Monday afternoon.

According to the case statement, a private car hit Lt Wasif's motorcycle in Dhanmondi as he and his wife were going to Dhaka Cantonment from Nilkhet around 7:45pm.

Some people came out of the car and verbally abused him and his wife and left the place.

When the car stopped at a nearby signal, Lt Wasif knocked the window of the car and introduced himself, after which the passengers got off the car again.

They physically attacked Lt Wasif and immediately went away, leaving the car behind, the case statement said.

On duty police rescued Lt Wasif and detained the driver along with the car.

The incident was captured by some people and later it went viral on social media.

In the video, it shows that the victim is introducing himself to be armed forces’ officer Lt Wasim. “The car hit my motorcycle. I wanted to talk to the car inmates. I disclosed my identity. But they started to beat me. My wife was not spared. I don’t know the reason for attack.”

It is learnt that Haji Selim’s son and staffs were inside the car bearing registration number Metro Gha 11-5736. A sticker used by lawmaker was also stipulated on the glass of the car.