Covid in Australia: Victoria sees first day without a case since June 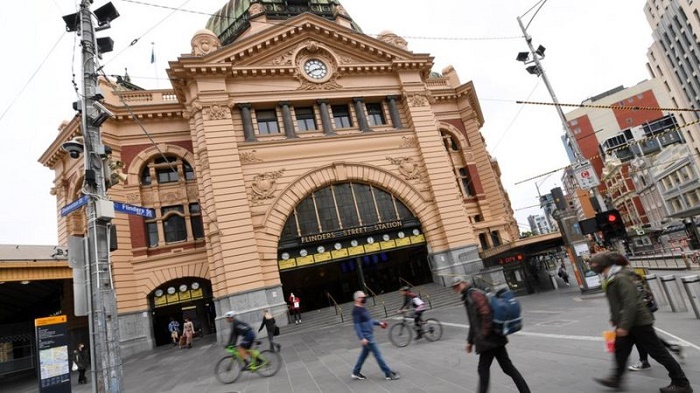 Victoria in Australia has recorded no new Covid-19 cases for the first time since Melbourne - the state capital - went into lockdown 111 days ago.

The state was the epicentre of Australia's second wave, accounting for over 90% of the country's 905 deaths.

It saw cases surge to over 700 per day in July, but severe stay-at-home rules and a curfew have curbed the numbers.

An announcement had been expected on Sunday, but a small outbreak in the city's north warranted a delay, Premier Daniel Andrews said.

But on Monday the state health department reported no new cases from the outbreak, and no new deaths across the state. The state has not seen a day of no cases since 9 June.

Locals were celebrating the milestone, with #CovidVic and #DoughnutDay - a reference to the number zero - trending on social media.

Australia adopted an approach of using lockdowns alongside proactive testing and tracing to contain the virus.

A nation of 25 million people, it has recorded about 27,500 infections - far fewer than many nations. It has had more than 900 deaths.

The state government put Melbourne into its second lockdown in early July after cases exceeded 100 cases per day. Infections peaked about a month later, before beginning to fall.

As the virus spread outside the city, stay-at-home restrictions were also imposed on the rest of the state.

But Melburnians endured the toughest measures including a night-time curfew, a one-hour limit on outdoor exercise, and a ban on travelling more than 5km (3.1 miles) from their home.

Most retail stores, restaurants and workplaces remain closed and most household visits are still banned.

The heavily policed lockdown - one of the toughest in the world - has divided opinion among the city's residents and prompted small protests.

In recent weeks, many business owners and others have called for the state to re-open, but others have supported the premier's cautious approach.

The state government has faced scrutiny over how the virus was able to gain hold across Melbourne, after spreading from hotel quarantine for returned travellers.

A judicial inquiry into the matter has heard there were weaknesses in contact-tracing at the start of the second wave.

The rest of Australia has seen very few virus cases in recent months.

Sydney has reported case numbers around Melbourne's level for the past fortnight, but health officials have so far curtailed the outbreaks.

Australia began allowing travellers from New Zealand on 2 October, with the first travellers allowed into New South Wales and the Northern Territory.