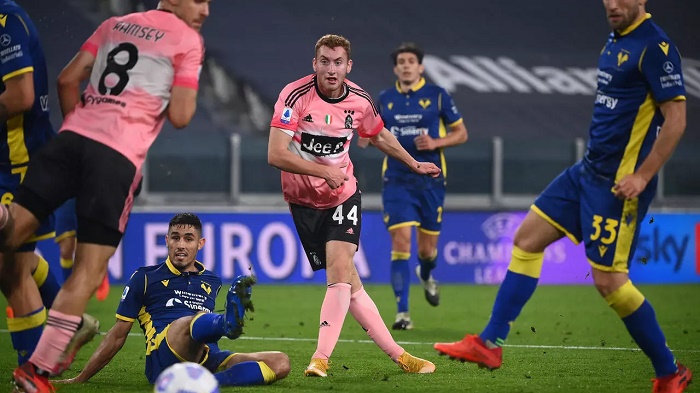 Dejan Kulusevski came off the bench to rescue a point as champions Juventus, playing without Cristiano Ronaldo, were held to a third consecutive Serie A stalemate at home against Hellas Verona on Sunday.

Portuguese forward Ronaldo remains absent after testing positive for coronavirus with Juventus preparing for next week's Champions League tie against Barcelona in Turin.

"We had a too wait-and-see first half, we weren't very aggressive with the midfielders but we had the most dangerous opportunities," said Juventus coach Andrea Pirlo.

"But we don't have to take a slap to react."

Swedish forward Kulusevski grabbed the equaliser with 13 minutes to go after substitute Andrea Favilli put Verona ahead after an hour in Turin.

Pirlo's side are fifth in Serie A, three points behind leaders AC Milan who host Roma on Monday.

Napoli moved up to second place, one point behind the leaders, after a 2-1 win over promoted Benevento, a match in which brothers Lorenzo and Roberto Insigne scored for rival clubs.

Nine-time reigning champions Juventus have stalled under new coach Pirlo, having also been held by promoted Crotone 1-1 last time out and 2-2 at Roma.

Argentina forward Paulo Dybala got his first start in three months but despite threatening could not find the winner.

Ebrima Colley had a goal ruled offside after quarter of an hour for Verona with goalkeeper Marco Silvestri denying Federico Bernardeschi early.

Juventus had their chances with Juan Cuadrado rattling the woodwork just before the break, with the Colombian then setting up Alvaro Morata who lobbed over Silvestri into the goal, only to be ruled offside.

Favilli came on after 55 minutes and five minutes later had the visitors ahead finishing off a Mattia Zaccagni cross.

Morata missed another chance on 72 minutes with Dybala hitting the crossbar five minutes later, before Kulusevski beat Silvestri from an angle.

The Verona goalkeeper pulled off two late saves from Dybala and a Morata header, as the eighth-placed visitors also remain without a win in three games.

Lorenzo Insigne cancelled out a goal from his younger brother Roberto as Napoli staged a 2-1 comeback win over local rivals Benevento.

"I'm very happy, but sorry my first goal in Serie A was against my brother," said midfielder Roberto, 26, who opened the scoring after half an hour against his hometown club who he left two seasons ago for Benevento.

"Playing against my brother and Napoli, the team of my city, is a great feeling, but we are all a little saddened by the result."

Lorenzo Insigne, 29, marked his return from injury with a stunning equaliser for his 68th top-flight goal for Napoli.

The Napoli captain also had a goal ruled offside before blasting in with his weaker left foot after an hour, with Matteo Politano setting up Andrea Petagna for the winner seven minutes later.

"After the game? I told him (Roberto) my left is better than his," joked Lorenzo.

"No, I'm kidding, we also hugged because today was an exciting day for our family. I'm happy with the goal and congratulate my brother too.

"The left foot is not my favourite but I struck it very well and I must say it was a beautiful goal."

Gennaro Gattuso's side got back to winning ways after their surprise 1-0 Europa League home defeat by AZ Alkmaar.

Benevento are 12th after their third defeat in five games.

Fiorentina got back winning 3-2 against Udinese thanks to a Gaetano Castrovilli brace either side of a Nikola Milenkovic header.

A pair of Stefano Okaka headers had revived Udinese hopes.

Five of the goals came in a thrilling first half. Cagliari are 10th with Crotone bottom of the table.