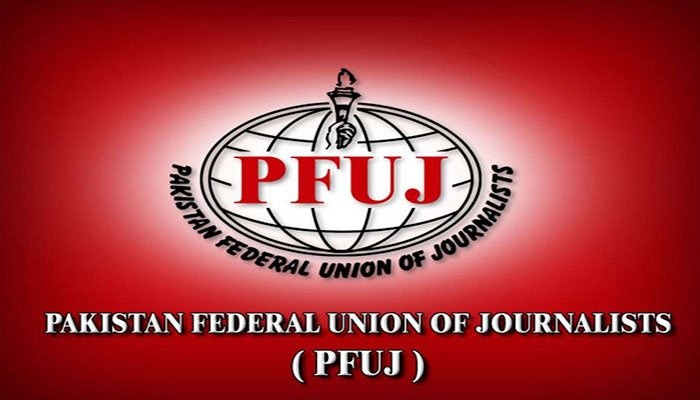 On the call of Pakistan Federal Union of Journalists (PFUJ), the journalist community across the country held protest rallies against the shrinking space for freedom of press, speech and expression in the country following fascist and dictatorial policies adopted by the Pakistan Tehreek-e-Insaf (PTI) government.

Speakers at the protest rallies and demonstrations, arranged by 13 unions of journalists, severely criticised the PTI government, led by Prime Minster Imran Khan for adopting anti-media policies, which would be fought and defended with the power of pen by the journalist community.

At the Islamabad Press Club, a big protest rally was arranged by the Rawalpindi Union, which was attended and addressed by journalist bodies representatives, politicians, civil society members and senior journalists. They called for joining hands for defending freedom of the press in the country.

Former chairman Senate, Raza Rabbani, while addressing the rally, stressed launching of a movement without any further delay, as the incumbent government is bent upon suppressing the media and voices of descent.

PFUJ Secretary General Nasir Zaidi, while shedding light on the history of struggle of the federal union for the rights of journalist and sacrifices for democracy and norms, urged the media community to get prepared for long struggle for their basic rights.

“We have no stakes to safeguard but to fight against forces of fascism who, in the name of so-called democracy, are adopting anti-media policies just to suppress the media in the country,” he added. Even the consensus 8th wage board award was not being implemented which was a failure of the government, he added.

National Press Club President Shakeel Anjum and Secretary Anwar Raza called for continued struggle for safeguarding the media and rights of journalists across Pakistan. Rawalpindi-Islamabad Union of Journalists (RIUJ) President Amir Sajad Syed and Secretary Asif Ali Bhatti, who really worked hard to arrange for protest rallies, said in their speeches that it’s an era of freedom of press and restrictions could not be imposed on it as we are committed to fighting restrictions with iron hands.

Senior journalists and anchor Hamid Mir, in his speech, warned the government and the anti-media forces that the journalist community could not be deterred by abductions of journalists and imposing censorship through hidden hands and some ill-advised owners of the media houses.

“We will not accept journalist protection bill, rejected by the journalists community during the previous PML-N government, which was reportedly being adopted by Imran Khan led government, he warned.

Former PFUJ president Afzal Butt criticised the government for retrenchments lay-off and non-payment of salaries to state-run Radio and Pakistan Television apart from retrenchments in private media due to anti-media policies, adopted by the PTI government.

Muhammad Ashraf of the PTV retired employees forum apprised the rally about victimisation and denial of dues and forced retirement in state-run television by the management. Amar Rasheed of Awami Workers Party, Sardar Shaukat, Sagheer Chaudhry, Arshad Waheed Chaudhry, Nisar Ahmed, Sharjeel Rao, and Bilal Dar also addressed the rally and criticised the government for suspending the transmission of a private channel and adopting anti-media policies. They demanded immediate restoration of transmission of the channel and advertisements for regional news papers to save the families of journalists from further financial crisis.