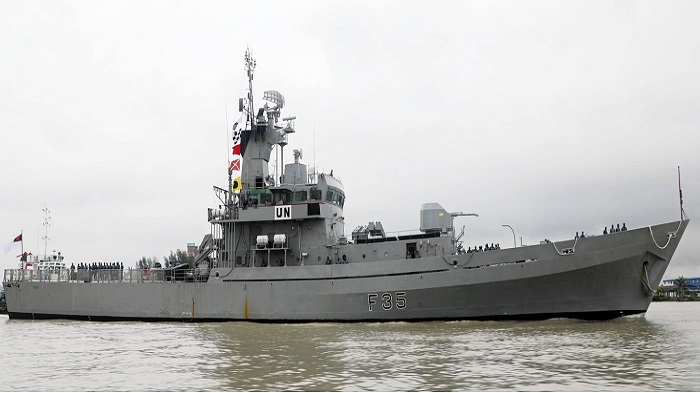 Bangladeshi naval ship BNS Bijoy, which was damaged in an explosion at Lebanon’s Beirut Port on August 4, has returned to the Chattogram Naval Jetty on Sunday after successfully serving in the UN peacekeeping mission under the Multinational Maritime Task Force in Mediterranean Lebanon.

When the ship arrived at Chattogram Naval Jetty on Sunday, it was officially welcomed by Chief of Naval Staff Admiral M Shaheen Iqbal.

At this time, the Chief of Naval Staff congratulated all the officers and sailors present on the ship for the successful completion of the mission.

Addressing the officers and sailors present, the Chief of Naval Staff said that the Prime Minister sincerely inquired about the damage caused to the ship and the injuries of the crew in the explosion at the port of Beirut on August 4.

At the same time, the Prime Minister gave necessary instructions to overcome the damage of the ship and to take all necessary measures for the proper treatment of the sailors.

The Chief of Naval Staff highly commended the immense courage, diligence and professionalism of each member of the ship in ensuring the well-being of all and bringing the ship back to the country safely after the necessary repairs.

The Chief of Naval Staff further said that the successful return to the country has proved that the Bangladesh Navy is capable of dealing with any challenge entrusted to it with professionalism.

He also thanked the crew of the ship for being free from corona in the event of a global corona virus epidemic.

The ship left for Lebanon on December 1, 2017 to take part in international UN peacekeeping operations. Since joining, the ship has been providing maritime interdiction operations in Lebanese waters, surveillance of suspicious ships and aircraft, rescue operations on wrecked ships, and training of members of the Lebanese Navy.

During the stay in Lebanon for the last three years, 330 members of the Bangladesh Navy have been on duty on the ship with utmost efficiency, professionalism, sincerity and discipline.

The ship actively participates in regular peacekeeping patrols and other activities with ships from other developed countries under the International Maritime Task Force. In addition to gaining an idea about the navies of other countries, the professional skills of the ship’s officers and sailors have been enhanced by participating in sea exercises with those ships.

Moreover, the ship has brightened the image of Bangladesh by successfully fulfilling its international responsibilities in the Mediterranean.

Earlier, after completing his duties, BNS Bijoy left for Bangladesh on September 24, 2020 and reached the country after crossing about 10,020 km of sea route.

BNS Bijoy was damaged and at least 21 members of Bangladesh Navy were injured in the powerful explosion in Beirut, which left more than 170 people dead and over 6,000 others injured on August 4.

BNS Shongram was sent as a replacement for the damaged BNS Bijoy on August 9, while the damaged ship was taken to Turkey for repair.

BNS Shongram is currently serving in Lebanon for the UN peacekeeping mission in the Mediterranean.