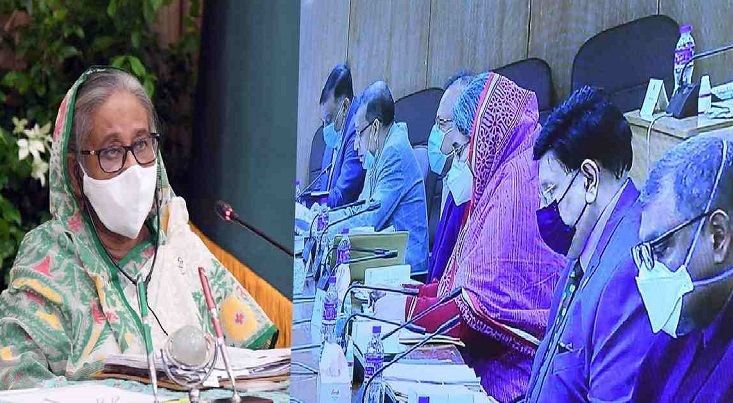 As many people have become reluctant to wear face masks despite the prevalence of Covid-19, the government has decided not to provide its services to those wearing no mask.

“Instructions have been given at all-levels, to all of our institutions -- social, organizational or formal institutions-- that no mask, no service. Masks must be used in all institutions, haats, markets, shopping malls, schools, and social and religious gatherings. We’ve made it compulsory,” Cabinet Secretary Khandker Anwarul Islam said.

He was briefing journalists after the weekly Cabinet meeting on Sunday.

The Cabinet meeting was held virtually with Prime Minister Sheikh Hasina in the chair. The Prime Minister joined it through a videoconference from Ganobhaban, while other cabinet members got connected from the Bangladesh Secretariat.

The Cabinet Secretary said divisional commissioners have also given directives to ensure the display of a message outside every government and private office that one must enter the office wearing a mask.

Besides, the Islamic Foundation has been instructed to ask the imams of mosques for spreading the message after prayers -- at least twice a day -- that wearing masks is a government order.

The Cabinet also gave the final approval to the draft of the Women and Children Repression Prevention (Amendment) Bill, 2020 to enact a law through parliament repealing a recent ordinance promulgated allowing death penalty alongside life term imprisonment as punishment for rape.

The Women and Children Repression Prevention (Amendment) Ordinance, 2020 was promulgated as Parliament was not in session at that time, Khandker Anwarul Islam.

“If an ordinance is promulgated in the absence of a Parliament session, it is to place the ordinance in Parliament on the very first day of the next session. So, what was brought in the format of an ordinance was placed in the Cabinet as the draft of an act,” he said.