Green puppy born with litter of white siblings in Italy 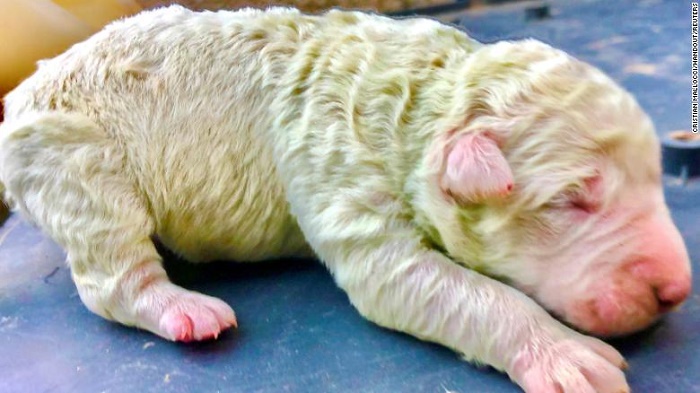 As a sheep farmer, Cristian Mallocci might be accustomed to the occasional black sheep amongst his flock.

But nothing could have prepared him for a green dog.

Earlier this month, Mallocci's dog Spelacchia gave birth to a litter of five pups -- four of whom were white like their mixed breed mother. The last, a male, was covered in green fur.

While the rest of the litter, born on October 9 on the Italian island of Sardinia, are up for adoption, Pistacchio will be staying with Mallocci and his family.

The farmer told CNN: "We are keeping him, he arrived in a dark time but he will bring luck!"

Though rare, it is not unheard of for dogs to be born green. Back in January, a white German Shepherd in North Carolina gave birth to an unusually colored pup, whose owners later named him Hulk. In 2017 a golden retriever in Scotland also had a strangely colored.

The rare phenomenon is thought to happen when light-colored puppies come in contact with biliverdin, a green pigment found in bile. It's the same pigment that makes bruises turn green. It essentially dyes their fur in the womb, and the color fades over time.

According to Mallocci, he was told by his dog's vet that "during the gestation period, biliverdin, a substance from bile, mixes with amniotic fluid from the placenta, staining the weaker puppy."