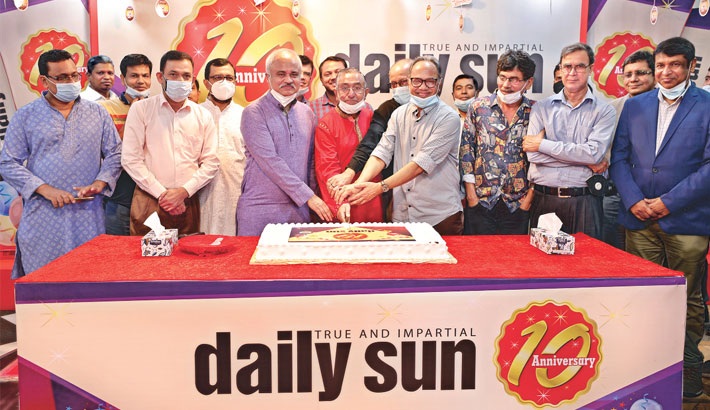 Daily Sun Editor Enamul Hoque Chowdhury, Bangladesh Pratidin Editor and News24 Chief Executive Officer (CEO) Naem Nizam and Kaler Kantho Editor Imdadul Haq Milon cut a cake at a function arranged in celebration of the 10th anniversary of the English daily at its office in Bashundhara Residential Area in the capital on Saturday. Journalists and officials of the Daily Sun were also present. —sun photo

The Daily Sun, a newspaper of the East West Media Group Ltd of Bashundhara Group, celebrated its 10th founding anniversary on a limited scale at its office in Bashundhara residential area of the capital on Saturday.

Completing one decade of objective journalism, the newspaper stepped into the 11th year of its publication with a fresh promise to quench readers’ thirst through producing positive news reports and highlighting Bangladesh’s ongoing development ventures across the world.

This year, the Daily Sun has dedicated the auspicious occasion to the greatest Bengali and Father of the Nation, Bangabandhu Sheikh Mujibur Rahman, marking his birth centenary.

Amid the ongoing wave of the coronavirus pandemic, the newspaper hosted a simple staff-only function at its office in Bashundhara Residential Area of the capital.

“We’ve been trying hard to quench readers’ thirst through our news stories,” he said, encouraging the staff of the Daily Sun to make the newspaper a good one.

“It’s a collective effort of all staff in the Daily Sun. All from its office to the management are contributing equally to making the Daily Sun a standard newspaper,” the editor said.

Expressing gratitude to Prime Minister Sheikh Hasina and other writers of the Daily Sun for the anniversary supplement, Chowdhury said the publication titled ‘Mujib the Immortal’ is a unique collection of philosophy of Father of the Nation Bangabandhu Sheikh Mujibur Rahman in the eyes of experts in respective fields.

Naem Nizam appreciated the Daily Sun for maintaining courageous journalism through producing news for its print and online editions.

“The Daily Sun has played a front-line role in taking journalism to a new standard. We hope the newspaper will continue to produce good news stories. When the corona pandemic emerged in March, many journalists discouraged print edition.  And the Daily Sun along with other media outlets of Bashundhara has shown a courageous role in continuing the print edition for the sake of the survival of the newspaper industry in the challenging situation of the corona pandemic,” said Naem Nizam, also general secretary of the Editors’ Council.

He mentioned that a demand for printed newspapers will remain forever as many American media have returned to their print editions along with online versions to fulfil readers’ demand.

Imdadul Haq Milan said the acceptance of printed letters will never end and the Daily Sun has maintained the standard in the country’s English newspaper since its inspection.

After cutting the cake, the Kaler Kantho editor and Banglanews24 Editor Jewel Mazhar wished the Daily Sun editor with bouquets.

In the last one decade, the newspaper has taken a place in readers’ minds at home and abroad, maintaining accuracy in news production for print and online versions.

The Daily Sun, a concern of the country’s leading business conglomerate Bashundhara Group, started its journey in 2010.

Meanwhile, there are many feathers added to the crown of the newspapers as achieved title of ‘the second most circulated English newspaper’ in the country, official data shows.

From the first day of commencing its news operations, the newspaper has been maintaining innovation in news production and courageous journalism.

Alongside its print version, the Daily Sun produces real-time news on internet edition (daily-sun.com) with vibrant presence on social media.