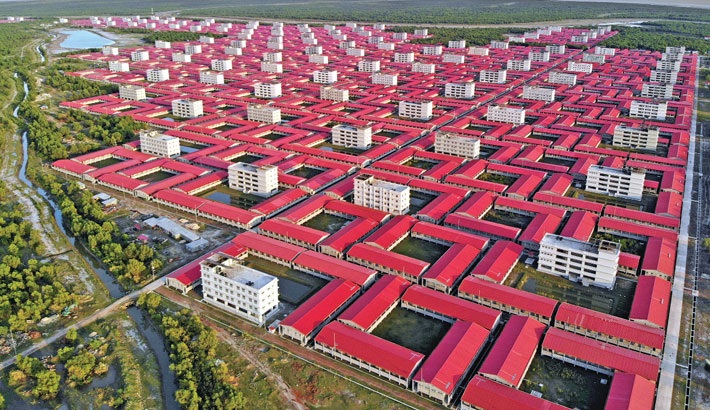 Bhasan Char, a remote island at Hatiya in coastal Noakhali district, has radically been changed in just two years. Once upon a time, there was nothing but a few trees and buffaloes. Bangladesh Navy has turned the char into a new town.

All the benefits of civic life have been arranged in Bhasan Char which has been made liveable for the displaced Rohingyas at a cost of Tk 3,095 crore.

Now, Bhasan Char can accommodate 0.1 million Rohingyas who are living in refugee camps in Cox’s Bazar after fleeing to Bangladesh from Myanmar.

Accommodation has also been made ready for representatives of international organisations, including the United Nations. These residences have an air-conditioning system.

There are two hospitals, three schools, a super shop, two mosques and a playground in Bhasan Char.

In the future, two more modern housing-cum-office buildings will be constructed to accommodate representatives of local and foreign NGOs and development partners.

Everyone is fascinated by this eye-catching residential area in Bhasan Char, a diverse island in the ocean.

At present, a large number of Rohingyas are living in different camps in Cox’s Bazar. In order to relocate them temporarily, a project called ‘Ashrayan-3’ was undertaken in 2017 to build a living place for them.

The Navy is tasked with making the char habitable, developing infrastructure, afforesting and ensuring the island’s security.

Commodore Abdullah Al Mamun Chowdhury, project director of Ashrayan-3 Project in Bhasan Char, said, “All the works of the main project have been completed within the stipulated time on the correct and timely instructions of the Prime Minister’s Office.”

“Navy members have relentlessly carried out the duties entrusted to them. Accommodation and offices for representatives of international organisations, including the UN, have been built. The whole project has almost all the benefits of civic life,” he added.

While visiting Bhasan Char, it was seen that one building for UN representatives engaged in administrative work, one for the Refugee Relief And Repatriation Commissioner, one for the Red Cross and international NGOs, one for multipurpose super shop, two for law enforcement agencies, two for mosques, three for schools, two for 20-bed hospitals and four community clinics have been set up there.

A number of navigational buoys have been set up from Chattogram to Sandwip, Hatiya, Noakhali, Chandpur, Dhaka and other areas for safe passage of small ships and cargo vessels.

Following this, a lighthouse called the Beacon of Hope has been constructed for proper navigation as the inland waterway adjacent to Bhasan Char which was used for the movement of ships and cargo vessels from Chattogram to Dhaka.

There are also two fire jeeps and a fire station aimed at installing fire-fighting systems in the project area.

Four landing craft utilities (LCUs) made in Khulna Shipyard were deployed at Bhasan Char for the safety and emergency relocation of manpower living in the island. Besides, eight high speedboats made in China are engaged for the movement in Bhasan Char.

Construction of 120 waste bins has been completed in the project area. Green waste can be used as composite fertiliser. The rest of the waste will be dumped away from the locality. Construction work of incinerator for incineration of non-compostable waste will start soon.

One lakh people will need 1,125 tonnes of fuel a month in the project area. There will be eco-stove as a cooking facility. It will use charcoal as fuel. The project has 250 biogas plants.

Bhasan Char’s internal communication network is very good after the construction of about 42km RCC and Herringbone road communication system.

Two 20-bed hospitals and four community clinics in Bhasan Char will be run by the Ministry of Health and Family Welfare.

The ground floor of each shelter built in Bhasan Char has primary education facilities and can be used for various cultural and social events.

It was seen at the project area that there are about 10,000 buffaloes in Bhasan Char now. These buffalo farms are run on private initiative. Dairy product manufacturing activities can be taken up by collecting buffalo milk.

Fruit and forest tree planting activities have started in Bhasan Char. Two lakh trees have been planted this year.

A large lake has been made as a reservoir in the project area. It will be helpful in farming fish. The revised development project proposal proposes digging two more lakes.

Besides, a success has been found in experimental paddy cultivation in Bhasan Char. On a test basis, paddy produced in Barisal area was cultivated there.

After the Rohingyas move from Cox’s Bazar to Bhasan Char, they can take part in various economic activities if they want. There are various such arrangements.

However, there is no obligation for Forcibly Displaced Myanmar Nationals (FDMNs) or Rohingyas to engage in economic activities.

They will get ration and food through the cards. However, they can also engage in economic activities.