Horrible use of drugs 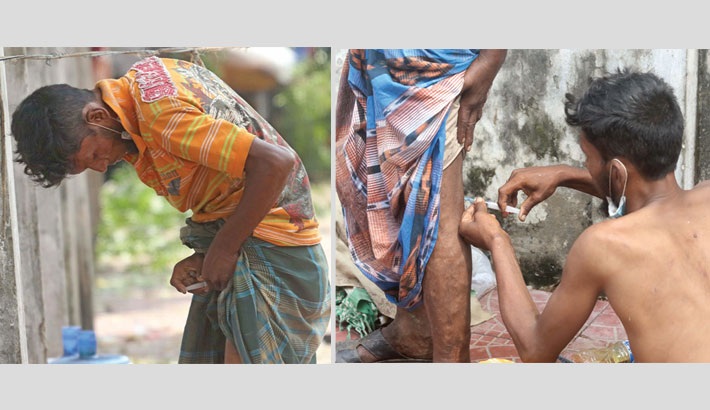 Sales and use of some banned drugs taken through injections continue unabated despite the government’s zero tolerance policy against drug abuse.

Commoners raise eyebrows as vagabonds, street children and the drivers travelling on a long route have been taking such drugs under the very nose of the lawmen. They face virtually no obstruction while taking those drugs.

Acknowledging the fact, the Department of Narcotics Control (DNC) officials say the safe haven of the injecting drugs is terminals and bus and train stations.

Besides, many pharmacies and private clinics are the hotspots for the sale of such drugs. The drugs which are taken through injection include Buprenorphine, Pethidine, Nalbun and others.

Subrato Sarkar Shuvo, assistant director and spokesperson of the DNC, told daily sun that it is true the injecting drugs are still used, but not widely. “We always operate drives against the sale and use of the drugs,” he claimed.

Sohel Mia, 30, an injecting drug user (IDU), who lives on the street at Purana Paltan, told daily sun that he buys the drug from Gulistan in the evening.

“In the evening, the drug dealers sit in the parked busses and sell these. Like me, many injecting drug users gather there and buy these.”

“Many can push injection into their bodies themselves while a big number of the drug users cannot. Many times, one helps another in this case. Besides, there are some men who help push injections in exchange of Tk10,” he said.

He added that Chankharpool, Kamalapur Railway Station, Gulistan, Gopibagh railway lines, bus terminals and leguna stations are also the hotspots for the sale and buy of the injecting drugs.

Sohel, who is the only son of his parents, hailing from Borhanuddin upazila in Bhola, began taking such drug since long ago.

On the feeling, he said the drug relieves them of tension and gives him a good sleep.

“But after getting up, they have to take the drug again. They cannot avoid it.” he said.

Subrato Sarkar Shuvo said Buprenorphine injection, which is banned, is taken mainly by inter-division truck drivers and helpers. The consequence of the drug is ultimate death, he said.

Besides Buprenorphine, the injecting drug users take Pethidine and Nalbun injections, he added.

Buprenorphine injections are smuggled from a neighbouring country through border areas, said Rabiul Islam, deputy director of the DNC headquarters.

“The sale and use of the injections are totally banned. The DNC always conducts drives against the sellers and users,” he said.

Urme Dey, assistant director (treatment and rehabilitation) of the DNC headquarters, told daily sun that as per licence, Gonoshasthaya Kendra only can manufacture Pethidine while it can sell such injections to the clinics which were given licences by the DNC.

She said the DNC so far gave licences to 1,000 private hospitals and clinics to use the injections; as per the prescriptions of doctors, such injections can be pushed into patients’ bodies.

It is the duty of Gonoshasthaya to keep account of the number of injections sold.

Assistant Director Subrato Sarkar Shuvo said: “If the clinics sell huge number of injections and give us the account of fewer numbers, we have nothing to do.”

On the Nalbun, Urme Dey said the injection was included as a drug in the Narcotics Control Act-2018. After that, none can be able to sell the injection without taking licence from the DNC, but none is yet to take licence.

She said they began operation against the open sale of the injection. A clinic at Mirpur was already fined Tk1 lakh.

According to the latest data of the DNC, its officials recovered over 2.31 lakh injecting drugs from the country between 2009 and August, 2020.