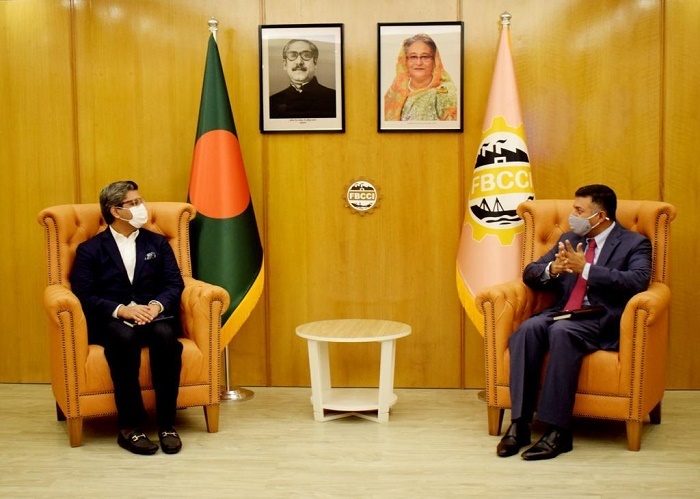 The FBCCI president also shared Prime Minister Sheikh Hasina’s stimuli and FBCCI’s role in its execution, the federation’s exhaustive consultation with both domestic and global strategic partners, the federation’s engagement from the frontline entailing economic opening with sustainability prioritised in the first year and recovery in next two with the HC.

Furthermore, social endeavours of food programmes, relief funds, healthcare products during Covid-19 for front-liners throughout the country- that were contributed on behalf of the private sector of the country- were also highlighted.

“Many Indian institutions have organic alignments for institutional partnership with FBCCI on our Impact 4.0 initiative which are being explored,” He said.

“No two nations have inseparable ties of heritage and humanity like ours. We will be engaged closely to address trade related issues that contradicts our heritage of humanity and our leaderships’ vision of complementary cooperation”, He further added.

Fahim also assured of being actively engaged in growth of Bangladesh’s exports, JVs, and prospective increase in value chain inputs from India.

Vikram Kumar Doraiswami said “Bangladesh has made tremendous progress in food sufficiency, vaccine production, generating resources etc. Major political problems have been resolved between the two countries. We may move forward for a bigger partnership in economic cooperation to integrate the relationship.”

He also mentioned the direct linkage of waterways and railways for trade facilitation between Bangladesh and India.