Sudan to normalise ties with Israel in new breakthrough for Trump 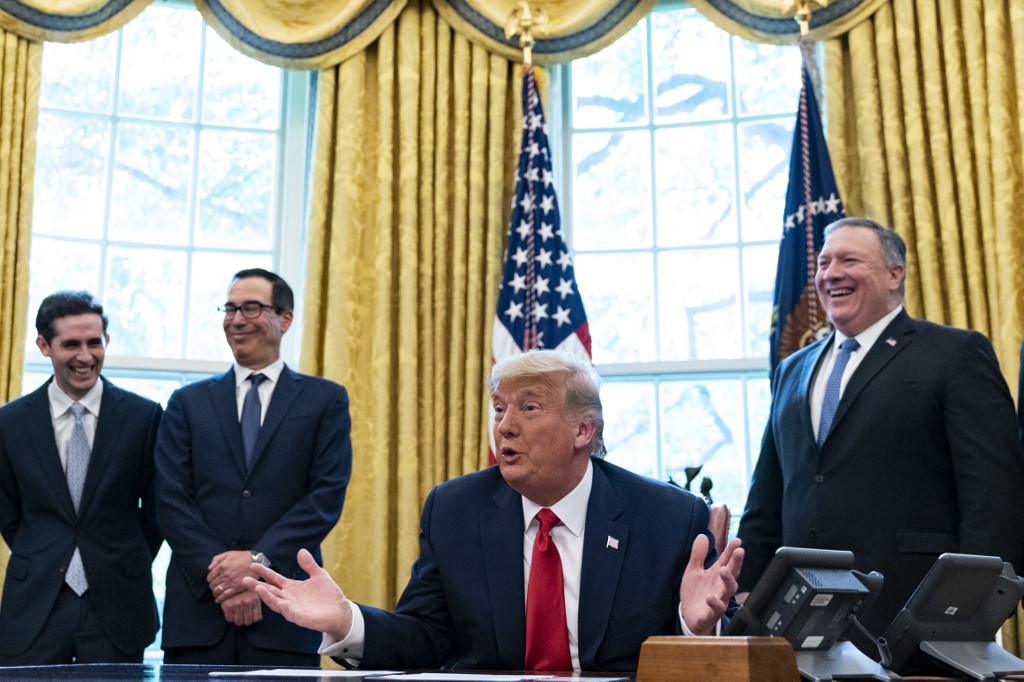 Sudan on Friday became the latest Arab nation to agree to recognise Israel in a diplomatic triumph for President Donald Trump announced days before US elections.

The United Arab Emirates and Bahrain signed an accord at the White House last month to normalize relations with Israel but Sudan carries added symbolism as an Arab nation that has been at war with Israel.

Trump announced the agreement by Sudan's year-old civilian-backed government moments after he formally moved to end the nation's designation as a state sponsor of terrorism, achieving a major objective for Khartoum.

Reporters were escorted into the Oval Office where Trump was on speakerphone with Sudan's leadership and Israeli Prime Minister Benjamin Netanyahu, a close ally of the embattled Republican president.

"This truly changes the region. It changes the lives of our peoples for the better and allows us to focus on the task of building our nations, building our future," Netanyahu was heard telling Trump.

"We have at least five more that want to come in and we'll have many more than that soon," Trump said in a room packed with visibly happy aides, few of them wearing masks despite the Covid-19 pandemic.

Until last month, the only Arab nations to recognize Israel were Jordan and Egypt -- neighbors of the Jewish state that had made peace after US mediation.

The Palestinian leadership has been outraged at Arab states' willingness to recognize Israel without any progress on establishing a Palestinian state.

Palestinian president Mahmud Abbas' office voiced "condemnation and rejection" of the deal between Sudan and the "Israeli occupation country which usurps Palestinian land."

While Bahrain and the United Arab Emirates have found common cause with Netanyahu and Trump against Iran, Sudan appears mostly driven by a desperate economic situation that has fueled new protests in recent days.

Both the United States and Israel committed to building trade with Sudan, an impoverished, conflict-torn nation that had faced years of criticism over its violent internal campaigns until the fall of dictator Omar al-Bashir last year.

In a three-way statement, Sudan and Israel said delegations would meet "in the coming weeks to negotiate agreements of cooperation" including on agriculture, aviation and migration.

"The leaders agreed to the normalization of relations between Sudan and Israel and to end the state of belligerence between their nations," it said, without setting a date.

As part of the deal to get off the terror blacklist, the White House said that Sudan's transitional government had deposited $335 million to compensate survivors and family members of victims of the 1998 bombings of US embassies in Kenya and Tanzania as well as other attacks by Al-Qaeda, which Bashir had welcomed.

"This decision will open wide the door to Sudan's deserved return to the international community," Hamdok's office said in a statement that did not mention ties with Israel.

Also on the telephone call was Sudan's top general, Abdel Fattah al-Burhan, who met Netanyahu earlier this year in Uganda.

Trump had announced his plan to delist Sudan on Monday through Twitter. But in the days before he formally took action, Israel sent a delegation to Khartoum to discuss normalization.

Israel is a major cause for evangelical Christians, a crucial voting bloc for Trump as he trails in polls ahead of November 3 elections.

Trump questioned whether the Sudan deal could have been achieved by his Democratic rival Joe Biden, who has supported Israel's reconciliation with Arab states but also promised to pay more attention to the plight of the Palestinians.

Trump said he "took a lot of abuse from people that were unable to make a deal for 40 years, and this has gone very quickly, very nicely, very inexpensively and with no blood."

Bahrain and the United Arab Emirates had long enjoyed quiet relations with Israel but a move by Sudan is especially significant in light of the nation's history.

Sudan played a small part in Arab-Israeli wars and, after Israel's decisive victory in 1967, Khartoum was where the Arab League issued its famous "three no's" -- no peace, no recognition and no negotiations with Israel.

Sudan will be off the terror blacklist, where it was first put in 1993, in 45 days unless Congress passes a resolution to object.

Congress is not expected to block the delisting but it must also approve legislation to grant Sudan immunity from further claims.

Until then, the $335 million will be held in an escrow account.