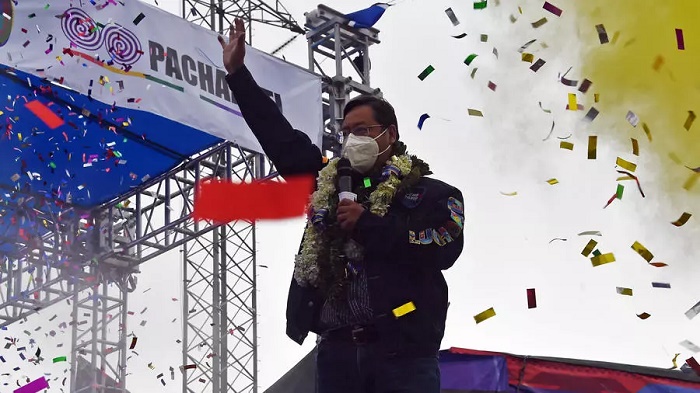 With all ballots now counted, Arce finished with 55 percent of the vote, meaning he won with no need for a run-off.

"It is with much humility that we receive this mandate," Arce said on his Twitter account. "Now our great challenge is to rebuild the country, to recover stability and hope."

Arce, 57, who served as finance and economy minister under exiled former president Evo Morales, claimed victory after exit polls late on Sunday showed he was heading for a huge win.

Electoral Tribunal president Salvador Romero said Arce and the newly elected Congress would assume their functions in the first half of November, without specifying an exact date.

It was a stunning result, as opinion polls leading up to the election had predicted Arce would come out on top but not garner enough votes to avoid a run-off.

It marks a return to power for Arce's Movement for Socialism party just under a year after Morales resigned and fled Bolivia following weeks of protests over his controversial reelection.

Morales resigned after an Organization of American States audit found the October 2019 election had been marred by fraud.

This time, the top electoral body abandoned the planned rapid count to avoid a repeat of last year's controversy and concentrated on the arduous manual count of votes that took more than five days to complete.

Some right-wing supporters have taken to the streets in protest at suspected fraud but international observers including the OAS, the European Union and the Carter Center confirmed the election was clean and transparent.

The electoral body said there had been a record 88 percent turnout amongst the 7.3 million eligible voters. Voting is mandatory in Bolivia for adults under 60.