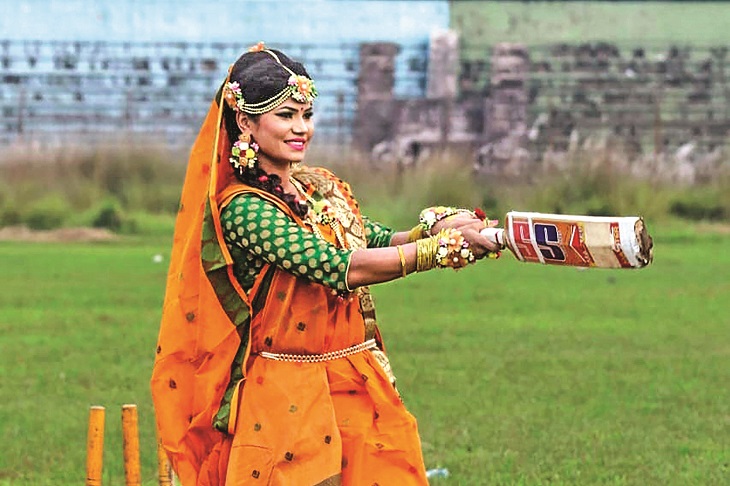 Bangladesh cricketer Sanjida Islam bats as she poses for a photograph with a traditional wedding dress during her marriage ceremony in Rangpur Stadium on October 17.

National women’s team cricketer Sanjida Islam is eyeing to make a mark in the national color leaving behind all the criticism over some photos of her pre-wedding photo-shoot, which went viral on the internet on October 21.

Sanjida become a sensation on the internet following posting her picture her social media account, wielding a bat in bridal get-up at the Rangpur Cricket Stadium as it did not take long for various news agencies including ICC to share it in their social media handles.

The photos got mixed reaction as some had criticized it while other greeted it with positive response.

Sanjida, who had played 16 one-day internationals and 54 Twenty20 internationals for Bangladesh, said that she is not concerned with all the notice adding that for rather she is eyeing to be noticed by shining in national jersey.

“I am eyeing to make an impact in the national jersey,” said Sanjida. “You all know that we have progressed in ranking in the recent past and will try to see if we can make further improvement in ranking,” said Sanjida adding that she is not too worried with all the criticism going around.

“When we play well, people cheer for us and when we play bad they want us out of the team. So as a cricketer I am used to these things. If I start answering everyone on social media, I cannot live my life. I am not bothered by it at all. My plan was to do a photo-shoot with bat and ball on the wedding day as we are a cricket couple. But after going to the stadium for an outdoor photo-shoot, I couldn’t help myself when I saw some kids playing. I took the bat and played only two balls and my teammate captured the moment nicely,” she said adding that her team-mates Sobhana Mushtary and Hasnat Cynthia captured those pictures when she was playing with some local kids.