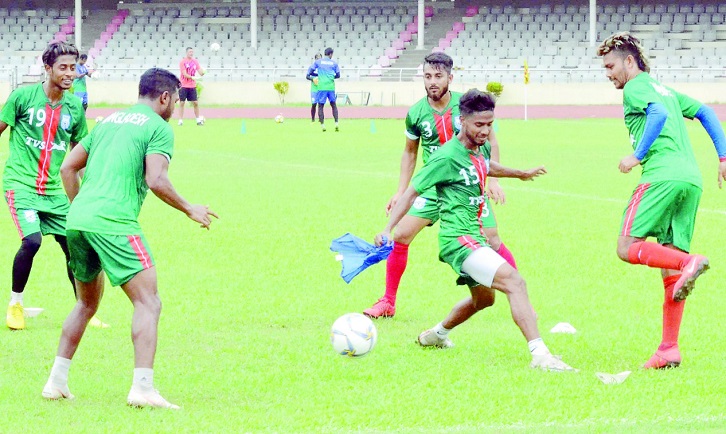 The first batch of Bangladesh national football team joined in the residential camp ahead of Nepal friendlies on Friday.

Booters will start their practice session at Bangabandhu National Stadium in the capital from Saturday under the supervision of local coaches as Jamie Day is expected to arrive later.

After joining the camp veteran goalkeeper Ashraful Islam Rana told the reporters that they would try to fast recover themselves ahead of the games.

“We had the chance to start camp for FIFA, AFC joint qualifiers last August. But the camp was suspended as FIFA-AFC postponed the qualifiers. We’re going to start another camp, it's really good for footballers. Now, our target will be to recover ourselves fast for the games,” veteran goalkeeper said.    Bangladesh Football Federation (BFF) decided to resume football with two FIFA tier-1 international friendlies between Bangladesh and Nepal, scheduled to be held at the Bangabandhu National Stadium on November 13 and 17 respectively. Ahead of the match, BFF announced a preliminary squad of 36-member.

Kings’ footballers earlier got a chance to do a camp for two-month as a part of the preparation for camp for AFC Cup 2020 but later, the club suspended the camp as Asian Football Confederation (AFC) cancelled the meet last September.  Kings’ young defender Tariq Raihan Kazi and captain Jamal Bhuiyan will arrive in Dhaka on Oct 28 and 29 respectively while head coach Jamie Day and assistant coach Stuart Watkiss on Oct 29.

The touring side Nepal haven’t confirmed their arrival date yet. Nepal players and staff were requested to test for COVID-19 at least 72 hours before their flight.

Both teams will undergo COVID-19 tests for the second time on October 10. BFF also decided to allow a few numbers of spectators for the upcoming matches. The federation will sit with the Ministry for Youth and Sports on Sunday to take decisions on health and security issues.