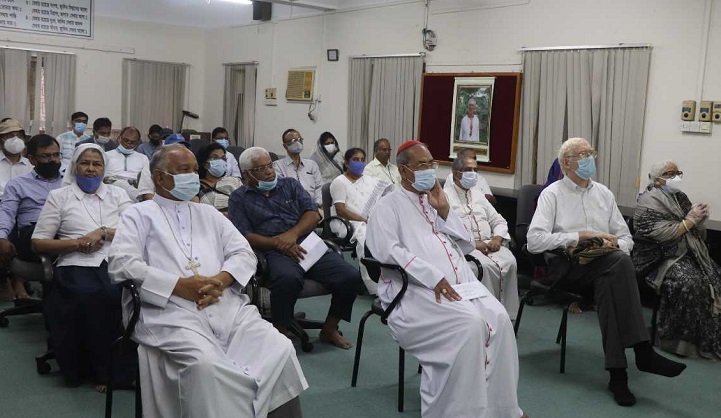 Civil society in Bangladesh on Friday commemorated Father R. W. Timm for his great contribution to rebuilding war-torn Bangladesh, alleviating the plight of disaster-hit people and the country’s education.

Remembering Father Timm, Bangladesh’s Cardinal Patrick D’Rozario stated that “Father Timm is still alive. He is alive in his thoughts, speeches and his works.”

Honoring Father Timm for his great contribution, Aroma Dutta, MP and Executive Director of PRIP Trust, said “Father Timm was the pioneer of our development and the development activities under non-government organization.”

The speakers said the people of Bangladesh will remember Father R. W. Timm for ever for his unforgettable contribution to rebuilding war-torn Bangladesh in 1971 and during various natural disasters.

Simultaneously an educator, zoologist, development and human rights activist, his important contribution in establishing various non-governmental development organizations and he is the true friend of Bangladesh who worked to raise world public opinion in favor of the Liberation War in 1971.

This admiring man devoted his life to the relief and rehabilitation activities during the devastating cyclone in the south of Bangladesh in 1970 and during the War of Liberation 1971.

For over six months in between 1971 and 1972, Father Timm was the director of the Cyclone Victims Rehabilitation Project on Monpura Island.

He established the Human Rights Council of Bangladesh and was elected its president three times in a row from 1987 to 1993. From 1990 to 1993, he established and served as the convener of the South Asian Forum for Human Rights.

From 2000 to 2011, Father Timm worked in different sectors of Bangladesh. His special tasks during this period were: rights and development of the tribal, rehabilitation of poor and physically challenged women, etc.

In 2008, he became a consultant for Caritas Bangladesh. In 2009 he was honored by the Vatican Pontifical Council for his work as Justice and Peace, Distinguished Academician, Distinguished Writer, Distinguished Scientist, and Human Rights Adviser.

In 2012, the Bangladesh Government rewarded him as “Friends of Liberation War Honour” for his outstanding contribution during the War of Liberation.