Protest in Malaysia against Pakistan's invasion of J-K in October 22, 1947 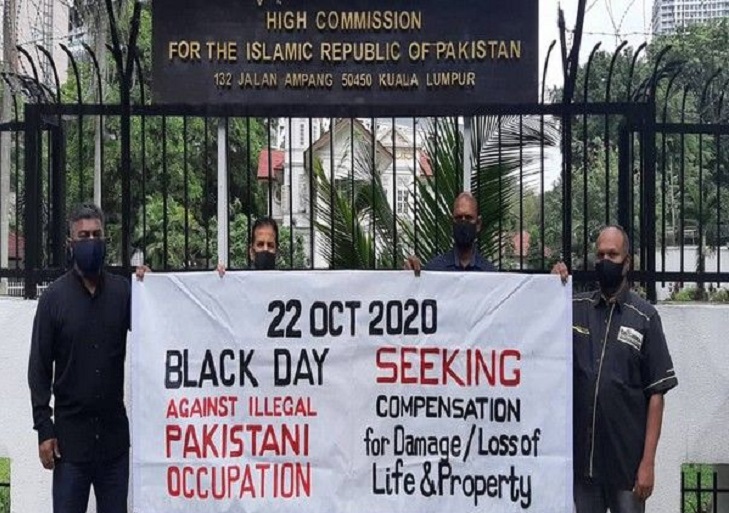 People staged a protest in front of the Pakistan Embassy in Malaysia on Thursday against the numerous atrocities and killings brought upon in the invasion of Jammu and Kashmir by Pakistan on October 22, 1947.

"22 Oct 2020 - Black Day against illegal Pakistani occupation - Seeking compensation for damage/loss of life and property," read a banner during the protest in front of the High Commission for the Islamic Republic of Pakistan.

October 22, 1947 is observed as the 'Black Day', when Pakistan invaded Kashmir and brought in its wake horrifying stories of mass plunder and vandalism.

Thousands of men, women and children were killed while the raiders carried out a siege of the then bustling town of Baramulla.

European Foundation for South Asian Studies (EFSAS), in a recent commentary, called October 22 as the "darkest day" in the history of Jammu and Kashmir when Operation Gulmarg was launched in a bid to seize the territory.

According to a European think tank, the tribal invasion had left between 35,000 and 40,000 residents dead, besides, a "grim mark" on the fate of J-K.

"The planners and perpetrators of the tribal invasion were, and remain, without doubt, the foremost enemies of the Kashmiri people. The day the invasion began on October 22, 1947, has to be the darkest day in the history of the J-K," the European think tank said. (ANI)