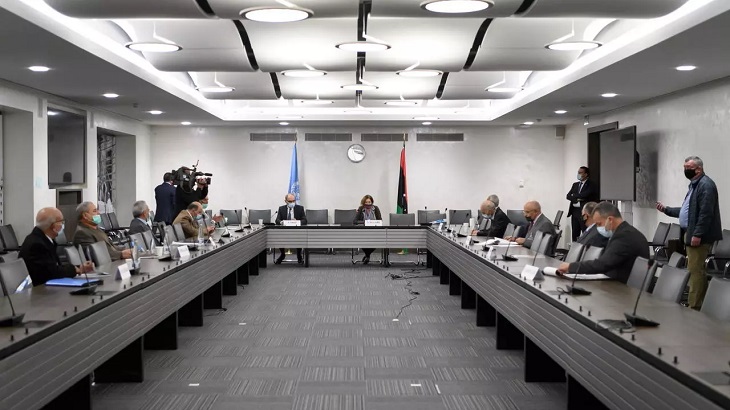 Delegates wearing masks stood before signing the agreement in Geneva with the aim to end conflict that has wracked Libya since dictator Moamer Kadhafi was toppled in 2011 in a NATO-backed uprising.

The "talks in Geneva today culminate in a historic achievement as Libyan teams reach a permanent ceasefire agreement across Libya," the UN's Libya mission said.

"This achievement is an important turning point towards peace and stability in Libya," according its Facebook page, which showed a live stream of the signing ceremony at the UN Palais des Nations.

Stephanie Williams, the UN's envoy to the troubled North African country, said it was "a moment that will go down in history".

"You have met for the sake of Libya, for your people in order to take concrete steps to put an end to their suffering," she said at the signing ceremony.

"Nobody can love Libya as much as you do," said Williams, who heads the UN Support Mission in Libya (UNSMIL).

"The road was long and difficult at times. Your patriotism was your way forward and you were able to reach a ceasefire agreement.

"I hope that this agreement will help put an end to the suffering of the Libyan people and we hope it will allow the displaced and refugees inside and outside the country to return to their homes and to live in peace and safety."

Libya has been wracked by nearly a decade of conflict.

Rival power centres and a myriad of militias are vying for control, human rights violations have been rampant, and traffickers are using the chaos to smuggle desperate migrants on dangerous sea journeys to Europe.

The capital Tripoli in the west is held by the internationally recognised Government of National Accord, while a parliament based in the eastern city of Tobruk is backed by forces led by military commander Khalifa Haftar.

Haftar -- supported by Russia, the United Arab Emirates and Egypt -- launched an offensive on Tripoli in April 2019 but was pushed back early this year as pro-GNA forces received crucial support from Turkey.

Fighting has since stalled around the central coastal city of Sirte, the late Kadhafi's hometown.

On Tuesday, the second day of the talks, Williams said that Libya's rival factions had agreed to maintain a lull in fighting and open internal land and air routes.

"What you have accomplished here is a crucial sign for Libya and the Libyan people," Williams said Friday.

"I am hopeful that future generations of Libyans will consider today's agreement as a first, critical, courageous step to achieve a comprehensive settlement of the Libyan crisis, that has gone on for too long."

She said there was a lot of work ahead in the coming weeks in order to implement the commitments but it was essential to do so as quickly as possible.