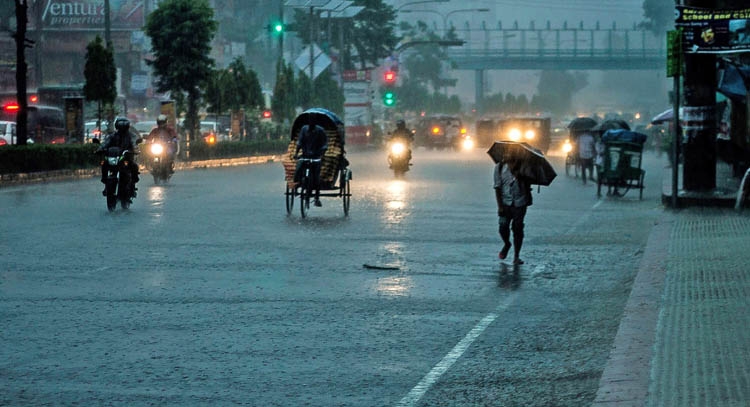 Many parts of the country are experiencing light to moderate rain which is likely to continue for the next 24 hours due to a depression over the Bay, the Met Office said Friday.

The weather office said 44mm rainfall was recorded in Dhaka in the last 24 hours till 6am on Friday. The highest amount of rain, 254mm, has been recorded in Khepupara of Barishal district.

At 9am, it moved northeastwards over the same area and is likely to move in a Northeasterly direction further.

South-west monsoon has withdrawn from north-western part of Bangladesh and conditions are favourable for further withdrawal from the remaining part of the country, the Met Office said.

Monsoon is strong elsewhere over the North Bay.

Heavy (44-88mm) to very heavy (89 mm) rainfall is likely to occur at places over Rajshahi, Rangpur, Dhaka, Khulna, Barishal, Chattogram, Mymensingh and Sylhet divisions during next 48 hours commencing 10am on Thursday.

Day and night temperatures may fall by (2-4)°C over the country.

The Met Office on Friday advised maritime ports to hoist local cautionary signal number 4 and warned that low-lying coastal areas could be inundated by tidal surges of three to five feet height above the normal astronomical tide under the depression’s influence.

All fishing boats and trawlers over the North Bay and deep sea have been advised to remain in shelter until further notice.