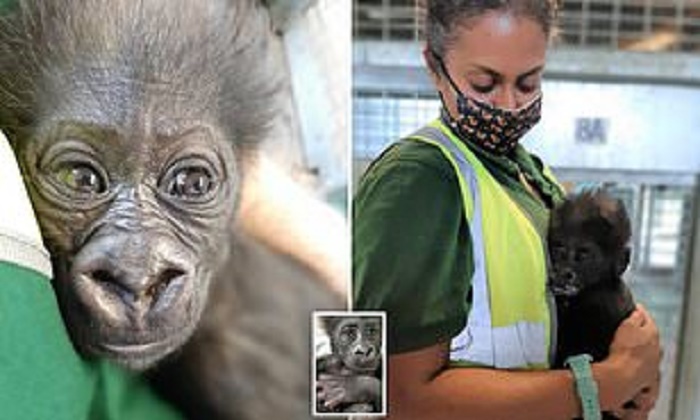 Zookeepers in the British city of Bristol are giving a baby gorilla round-the-clock care, including bottle feeding through the night, as his mother has been struggling to look after him.

The team of keepers at Bristol Zoo Gardens said that the baby, now two months old but still unnamed, was not getting enough milk from his mother, Kala, to survive and would now be hand-reared for the next four months.

"Hand-rearing any animal is not a decision we take lightly as our preference is always for an animal to be reared naturally by its own mother," Lynsey Bugg, mammals curator at the zoo, said in a statement.

"Sadly, this doesn't always happen and in this instance we decided that it was in the baby gorilla's best interests for us to hand rear him to ensure he had the best chance of survival."

Kala, the baby's mother, is said to be adjusting well and is in good health.

Bugg said that when the infant is away from his mother at night in onsite accommodation, zookeepers will try to treat him like his gorilla mother would, expecting him to hold on tight to them and making gorilla vocalizations.

During the day, the infant will be in the zoo's Gorilla House. It is hoped that if the animals are able to see, smell, touch, and be near him, the infant will soon be able to bond with the group and be accepted as a part of the family, the statement said.

Zookeepers are keeping the baby gorilla out of public view for now, but visitors can view the rest of the group.

The zoo invited members of the public to help choose a name in a poll on its Facebook page. The options are: Motuku, meaning "Chief of the Village" in Bubi, a local language in Equatorial Guinea; Hasani, meaning "handsome" in Swahili; Luango, a town on the coast of Equatorial Guinea; or Kidosi, popular Central African name.