Domingo urges all to keep patience with Shakib 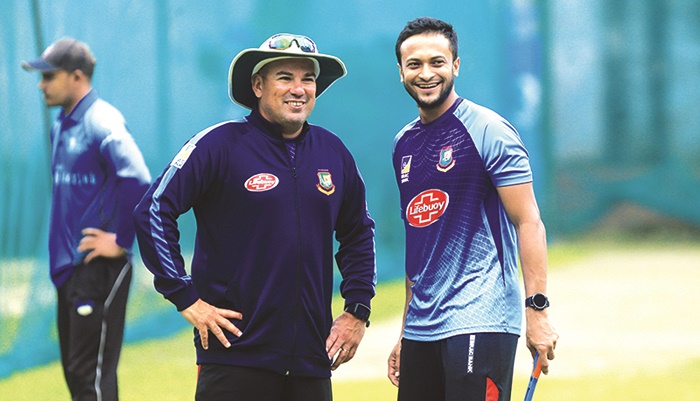 Bangladesh head coach Russell Domingo on Thursday urged all to show patience with Shakib Al Hasan as he is eyeing to make a comeback to competitive cricket following his one-year ban by International Cricket Council (ICC).

Shakib, who is serving a one-year ban imposed by ICC for failing to report corrupt approaches, will be able to resume competitive cricket from October 29.

“I spoke to him yesterday. He is working hard on his fitness. He is out of the country at the moment. Shakib is like a lot of other players, they need to get used to playing some cricket. So if you are expecting him to come straight away, and perform massive miracles, you have to keep patience with him. He hasn’t played cricket for a year now and he is keen to play,” Domingo told reporters on Thursday.

“He is the best all-rounder in the world. But he will also need to find his way. There’s a big difference between facing throwdowns and bowling machine and facing a 140kph bowler in pressure situations. He will also need some time to find his feet, and get his confidence back. We know he is a quality player, so I expect him to have a fantastic 2021 season for Bangladesh,” he said.

Domingo said that he is impressed with pace bowlers in the ongoing BCB President’s Cup while added that he is not losing his sleep as batsmen failed to meet the expectations.

“All we have been asking for in the last seven or eight months are to try to find some good young fast bowlers. Now we are finally developing a good group of fast bowlers who can be competitive. If you look at Taskin, Fizz, Al-Amin, Hasan Mahmud, Khaled and Shoriful. There are six or seven fast bowlers who can do well in international cricket,” said Domingo.

“From the time I got here, I have said that I think it is important we develop some fast bowlers. Every international team in white-ball cricket has a fast bowler that they call on, when they need a wicket. England calls Jofra Archer, South Africa calls Rabada, Australia calls Mitchell Starc and India calls Bumrah. So it is great to see that we have some options now that when the game is tight, we can call on someone to bowl quickly. It may someone like Taskin and Khaled to bounce one or two guys out. It is very pleasing to me. If we take one thing out of this one-day tournament is the performance of the fast bowlers,” he said while added that he knows it was hard for the batsmen.

“I think it is always easier to start after not playing for a long time than the batsmen,” said Domingo.

“Sure, it would be nice if we got some more runs but I think everybody has to understand that the players haven’t played any competitive cricket for nearly seven months. A few batters who joined the group have only started in the last week or two. The main thing for me as a coach was to make sure the guys were getting some game time. There’s no better practice than playing matches. All the games have been competitive. The wickets haven’t been that easy. I think maybe that’s why the batters have struggled,” he said.

“The most important thing is the guys are getting some game-time. The performances are not important, as far as I am concerned. I think the obsession with trying to win this tournament, and media wanting guys to win and perform all the time, is unrealistic considering the guys haven’t played for six or seven months. I’d like the media to maybe support the players a little bit more and not harshly judge them on performances based on ten days of cricket, having not played for seven months. Maybe give the guys a little bit of breathing space,” he added.

BCB introduced the three-team 50-over tournament as part of the resumption plan following their enforced seven months break the following corona.

Russell said that he was impressed with the way newly appointed ODI skipper Tamim Iqbal leadership qualities in the tournament despite he failed to take his team to the final.

“I have had some good discussions with Tamim about his captaincy and his style of leadership that he wants to adopt going forward. We still need to work out a few things,” said Domingo.

“Obviously tough to judge when you are playing only three games. He is using some bowlers he doesn’t know that well, and playing with some batters with whom he hadn’t played before. He is an experienced player. He has a good understanding of the game. Players will respect him a great deal. I am expecting him to be a very good leader for the team in the next few months,” he said.