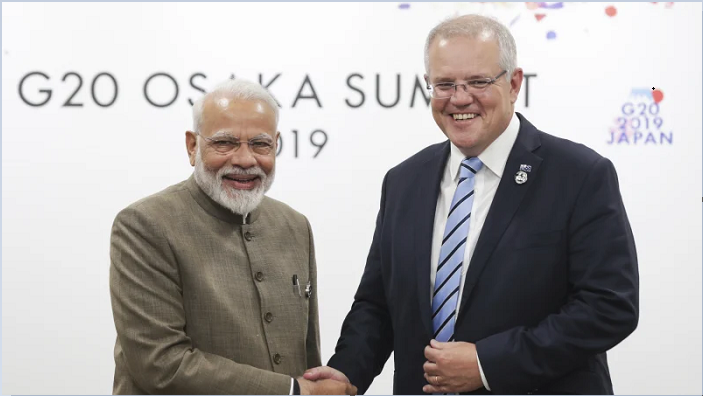 Australia will join India and the other two Quadrilateral Security Dialogue (Quad) partners – Japan and the United States – in joint naval exercises later this year. Called the Malabar exercises – despite the fact they will take place in the Bay of Bengal off India's east coast – the annual drills are an opportunity for the navies of the four Quad countries – to practice working together. They have previously been held in the Arabian Sea, off the Malabar coast.

Although every Quad foreign minister except US Secretary of State Mike Pompeo carefully avoids mentioning China as the target of the group, everyone knows that it is, including China. For years, concerns over Chinese displeasure prevented Australia's participation in the Malabar exercises, alternately due to Indian or Australian skittishness about offending China. No longer.

The deterioration in both India and Australia's relations with China has inevitably brought the two countries together. There's certainly no problem with the trade relationship. Australia enjoys a massive trade surplus with India, mainly driven by minerals exports, but (until the coronavirus hit) increasingly by education, too. As China has threatened to dial back its economic engagement with Australia, government, universities, and businesses have looked to India as an attractive alternative.

The questions come when the conversation turns to security issues. Australia and India signed an agreement on logistical access to each other's military facilities as part of a broader maritime partnership negotiated at last month's virtual summit between Scott Morrison and Indian Prime Minister Narendra Modi. Australian commentators generally welcomed the closer ties, but some raised questions about India's human rights record.

Although Modi was democratically elected, it is often said that his government does not share Australian values. Modi's Bharatiya Janata Party (BJP) is routinely labelled as "Hindu nationalist" and has been accused of suppressing freedom of the press, provoking anti-Muslim violence, and imposing a police state in disputed Kashmir. The torrent of negative coverage has fed into deteriorating perceptions of India in Australia.

That India faces challenges is not in doubt. With more than 1.3 billion people and a GDP per capita of less than $3000 a year, India is the world's most populous democracy, but also one of the poorest. Yet no other country as poor as India has anything like its track record of liberal democratic government.

In its South Asian neighbourhood, Pakistan struggles to overcome military rule, Bangladesh is essentially a one-party state, and Sri Lanka still hasn't come to terms with the legacy of a brutal civil war. All were once British colonies, but only India seems to have inherited Britain's tradition of the rule of law.

Farther afield, the situation is even worse. The less said about neighbours and near-neighbours like Afghanistan, Bhutan, Iran, Myanmar, Nepal, and (of course) China, the better. In fact, The Economist gives India the highest democracy rating of any country on the Eurasian landmass which stretches from South Korea to Greece.

Minority Muslims in Hindu-majority India have greater freedoms and civil rights than they do in Muslim-majority Pakistan and Bangladesh.

Despite consistent improvements over the last forty years, one-quarter of the population remains lliterate. India's university graduates may be world-class, but there are far too few of them.

As a result, public administration in India is often chaotic, and the government's public relations look shockingly politically incorrect when seen from an Australian perspective.

Perhaps the biggest controversy has been the furore over last December's Citizenship Amendment Act (CAA), which was instantly branded the "Muslim law" by India's opposition parties and the international press. The CAA opened a path to citizenship for members of religious minorities who fled Afghanistan, Pakistan, and Bangladesh for India before 2015. The first two are Muslim-majority countries governed under sharia law. The third is nominally secular, but nonetheless a place where non-Muslims face severe religious persecution.

Welcoming refugees from such dangerous and repressive regimes could and would have been spun by a sophisticated Anglophone democracy as a good-news story about religious tolerance. A citizenship path might also have been opened up to Muslim refugees who could demonstrate that they, too, were fleeing persecution of some kind, even if not religious.

The very fact that so many Muslims have fled from Muslim-majority countries to secular India belies the reality of the situation. Yet Modi and the BJP were tone-deaf, failed to prevent riots breaking out, and flubbed the implementation of the law.

For India really is a democracy, even if (like all democracies) an imperfect one. The best thing Australia can do to help raise governance standards there is to engage with India, and with both countries facing security threats from China, defence co-operation is a great place to start.