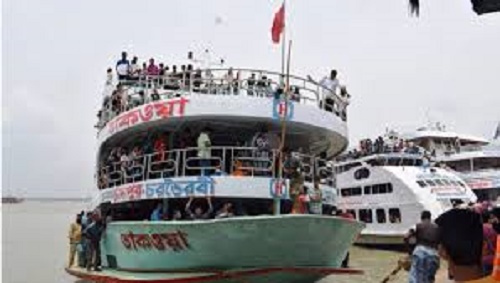 Bangladesh Noujan Sramik Federation (BNSF) on Thursday called off their indefinite strike which they enforced on 20 October to press home their 11-point demand.

The federation leaders agreed to call off their strike after a meeting with the labour and employment ministry.

However, he could not give details as he was at a meeting with the leaders of water transport workers.

Earlier on 20 October, they federation leaders enforced their indefinite strike creating a stalemate in the transportation of cargoes by river transports.

A huge quantity of imported goods, including essential commodities and industrial raw materials, remained stuck for the last two days at Chattogram port.

The goods include wheat, lentil, sugar, salt, fertiliser and industrial raw materials such as cement clinkers and steel scraps.

The water transport workers were passing idle time by halting the movement of all types of cargo vessels due to their strike.

Their demands include payment of salaries of the water transport workers as per the gazette announced in 2016, food allowance, health care equipment, provision of appointment letters, issuing identity cards and service books to workers, ensuring their social security, compensation of Tk10 lakh for those killed in workplace accidents and effective measures to stop extortion on the waterways.