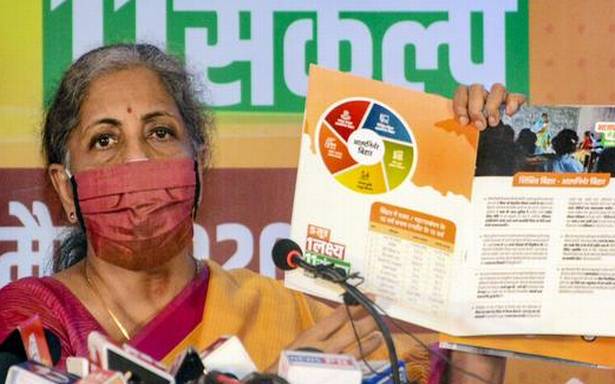 The Bharatiya Janata Party on Thursday released its manifesto for the Assembly polls in Bihar with the first promise in it being free distribution of vaccine against COVID-19 once it is approved by the Indian Council of Medical Research (ICMR).

Indian Finance Minister Nirmala Sitharaman who released the manifesto in Patna said, “As soon as COVID-19 vaccine is available for production on a mass scale, every person in Bihar will get free vaccination. This is the first promise mentioned in our poll manifesto.”

Jobs has become a major issue in these elections with Rashtriya Janata Dal (RJD) leader Tejaswi Yadav promising that his first act, on being elected to power, would be to create 10 lakh jobs.

A promise to construct 30 lakh pucca houses for the poor was also made. Special emphasis would be given to the information technology sector, as well as the establishment of 13 food processing parks.

Under the New Education Policy, engineering and other technical education will be made available in Hindi in the State. A minimum support price regime will be put in place for pulses too in the State.

“Bihar is one State where all citizens are politically sensitive and well-informed. They know and understand the promises a party makes. If anyone raises questions on our manifesto, we can answer them with confidence as we fulfil what we promised,” Ms. Sitharaman said.

She added that GDP has seen a sharp rise in Bihar under NDA rule, after the years of “Jungle Raj” under RJD rule.

Sitharaman did not take any questions at the presser.