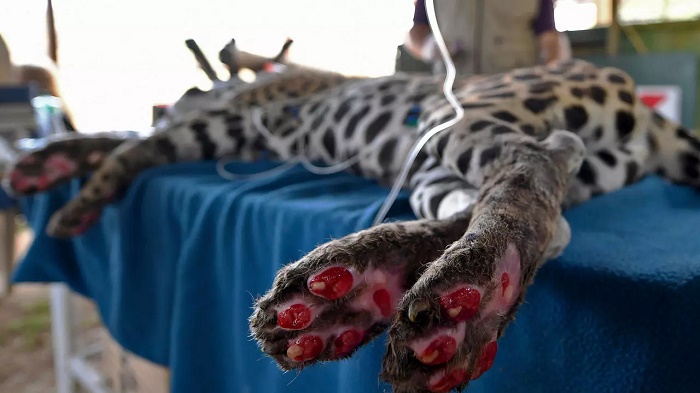 A jaguar badly burned in the fires that ravaged Brazil’s Pantanal wetlands this year has been returned to the wild after more than a month of intensive treatment for his burns.

Members of the veterinary team that treated the jaguar’s scorched paws with ozone and laser therapies released him Tuesday at the same spot where he was rescued, along a river in the Encontro das Aguas nature reserve in central-western Brazil.

Named Ousado, which means “daring” or “bold” in Portuguese, the five-year-old jaguar was placed in a crate on the river bank.

A video of the release made by the wildlife protection organization that treated him, the Nex Institute, shows his handlers pulling a rope to open the door of the crate from the safe distance of a boat on the river.

Ousado tentatively left the crate, examined his surroundings, then bounded off into the forest, prompting his veterinary team to burst into applause.

“When we found him, he was in a lot of pain. He couldn’t walk properly. Today, he was back to normal. He ran right up the bank. We’re very happy with the result,” veterinarian Jorge Salomao told AFP.

Known for its stunning biodiversity, the Pantanal is the largest tropical wetlands on Earth, stretching from Brazil into Bolivia and Paraguay.

An estimated 23 percent of the Brazilian Pantanal has gone up in smoke this year, amid the region’s worst drought in nearly half a century.

Ousado got a happier ending than that of another wounded jaguar rescued from the Pantanal, Amanaci.

She was found two months ago with third-degree burns, and is receiving stem cell treatments in a bid to help her heal.

But veterinarians say the fire damaged her tendons so badly she can no longer extend her claws, meaning it is unlikely she can be released back into the wild.