Cricketers’ Strike: Who made the most from uprising? 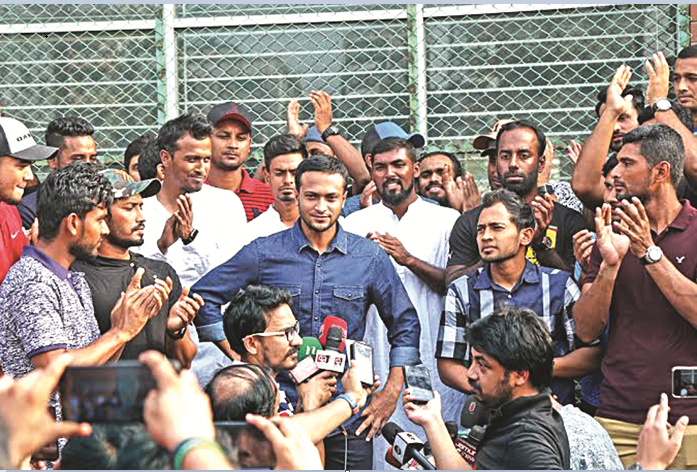 Bangladesh’s Shakib Al Hasan was crying loud despite controlling his tears when he faced the media to make a joint press conference with Bangladesh Cricket Board president Nazmul Hasan seeking an apology for his failure to report corrupt approaches that eventually led him to earn a one-year ban from cricket by the International Cricket Council.

While his red eyes spoke volume regarding his disappointment it also indicated that he had several sleepless nights just to prepare him to face the music on the eventful day that saw him choosing the back door to enter the home of cricket just the avoid the camera of the media, that remained a constant companion during his journey both in good and bad times.

The poster boy of Bangladesh, who had the privilege to experience stardom to the limit, got shattered seeing his image crumbling down on his own eyes after he announced in a dejected tone that he had made a mistake and ready to accept the punishment sanctioned by the governing body of the sport.

It not only appeared like a star had fallen from the grace as he was something like the face of the nation but at the same time going back to his actions that he had taken prior to the ban only triggered questions regarding his motives considering he was acting like a complete stranger in front of the world, judging him through his past activities.

The last few days ahead of the cricketers strike Bangladesh’s cricket fraternity revolved around Shakib and it all started when he made his voice heard by pointing fingers at the establishment by giving interviews raising questions over the work ethics and policy of BCB and went forward by stating that the players of the country are suppressed.

Some cricketers were in doubt whether BCB will show-cause him for making statements against the establishment where he is employed but at the same time, local cricketers began to think he is no more the Shakib that they used to know.

Shakib, who started voicing the issues with the country’s cricketing system, went one step further by leading an unprecedented strike on October 21 to fulfill the 13-point demands of the players.

It appeared that he cashed the trust that he received from the cricketers due to raising his voice against BCB in the local media outlets earlier and as a result, they followed his instruction keeping full faith in him.

Apart from former one-day international skipper Mashrafe Mortaza most of the national cricketers were present when they were reading out their demands and it certainly looked that Shakib is ready to fill the hole created by Mashrafe as the leader of the cricketers as the latter was involved in political activities.

It turned out to be a national crisis nonetheless and the decision not to include Mashrafe, who was the guardian of the cricketers until then, made it appear like it was a battle between Shakib and BCB.

The movement could have been easily resolved had those cricketers opted to give their 11-point demands in paper to BCB and provided them with some time to accept or reject it with an ultimatum that they would call for a strike if their demands were not met on the given deadline.

However, Shakib preferred otherwise and it suited his purpose as not only he began to get the loyalty of the cricketers but as he was leading the striking public began to start pouring sympathy believing that he is expected to be under the wrath of BCB as he was the main architect of the movement.

Shakib was well aware that his transfer from Dhaka Dynamites to Rangpur Riders played a big part in tantrums between BPL franchises and BCB and ended with the board opting to go without any franchises for this edition of special BPL.

It meant a lot to some local cricketers and to earn their confidence back Shakib had to go out his way as he knew very well that he will need their support in the upcoming days when he will be banned and it happened that way as everyone was behind him in this time of distress.

Nazmul Hasan raised questions over his motives right away when he stated that he is sensing something behind it and even went a step further when he left some hint that suggests that something big is coming for Bangladesh cricket.

Several cricketers on request of anonymity confirmed The Daily Sun that they have known that Shakib is on the radar a day after the strike was called but by then it was too late.

However, the feud between BCB and Shakib had a different meaning altogether in the mind of the public as they started believing that the latter is paying the price for leading the player’s movement and it was so deeply rooted that some quarter even began thinking that BCB has something to do with ICC to ruin the career of Shakib.

While some were vocal in the streets in front of the BCB premises when the verdict was announced by ICC and being carried by the media, it was much more in the local social platform and it appeared that all these things helped Shakib to gain the faith of cricketers and public sympathy ahead of the verdict and it only doubled after the crisis was resolved.

Shakib announced that he is the brand ambassador of a telecom company that prompted BCB to give him a show-cause notice and if he fails to give a satisfactory explanation they would take legal action against him and eventually it turned out like the board is taking revenge of leading the cricketers to strike and some went to an extent feeling that board had a hand on his ban.

Cricketers' movement completed its first anniversary, a wide discussion is tabled up regarding what the cricketers of the country have achieved from the protest and it seems the majority of cricketers are yet to get the maximum benefit with board changing its stance from time to time.

Shakib is expected to return back following his one-year ban on October 29 and it remains to be seen whether he be played a game with his teammates to reap the maximum benefit or will look after the welfare of his colleagues.