My job in 20 days to get them in best possible shape: Jamie Day 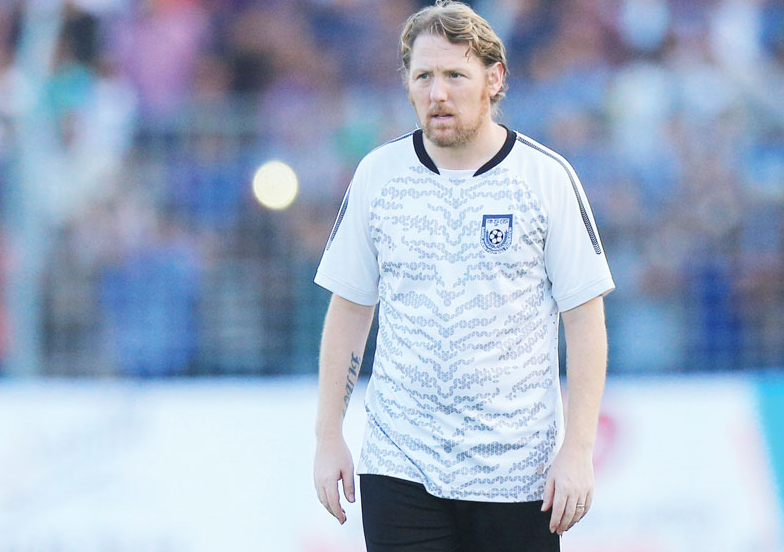 Bangladesh head coach Jamie Day said that he feels if they can prepare well within 20 days they have a chance against Nepal in the upcoming friendlies, scheduled on November 13 and 17 at the Bangabandhu National Stadium in the capital.

Ahead of the match, BFF announced a 36-member squad. All the players are requested to join the camp with their latest COVID-19 test reports at the city’s Pan Pacific Sonargaon on October 23.

“Both teams are going to be very similar in terms of fitness because preparation time is the same for both sides. Maybe who prepares best in a short time and is injury-free, the best team in 20 days will get results,” Jamie told reporters on Wednesday.

“It’s not about just winning but about ready and prepared to play football. We are asking players to play after seven months. Some players wouldn’t be ready and just stepped in to play. Some players would take 3/4/5 games to get back to the performance level they were before. So we are going into two games unknown. My job in 20 days to get them in the best possible shape for both games in the time frame,” he said.

Bangladesh Football Federation (BFF) decided to allow a few numbers of spectators at the upcoming FIFA tier-1 international friendlies between Bangladesh and Nepal rather than empty stadiums. The announcement came after a meeting of the National Teams Committee at BFF house.

“Our first priority is to ensure players' safety, minimising the danger and hosting the games as it should be. It will be unusual to play the games at an empty stadium, so we will allow a few spectators there. But it will be finalised after discussing it with the government. We will sit with the sports ministry on October 25,” the committee chairman and BFF Vice-President Kazi Nabil Ahmed MP told the reporters.

“The players and staff are asked to do their COVID-19 tests before joining the camp. There will be two more tests for them -- a week after their joining and another test on October 10 just before the matches. Nepal players and staff also have to undergo tests 72 hours before their flight. If anyone tests positive, he won’t come here. We will again test them at the same time with the Bangladesh team,” Nabil added.