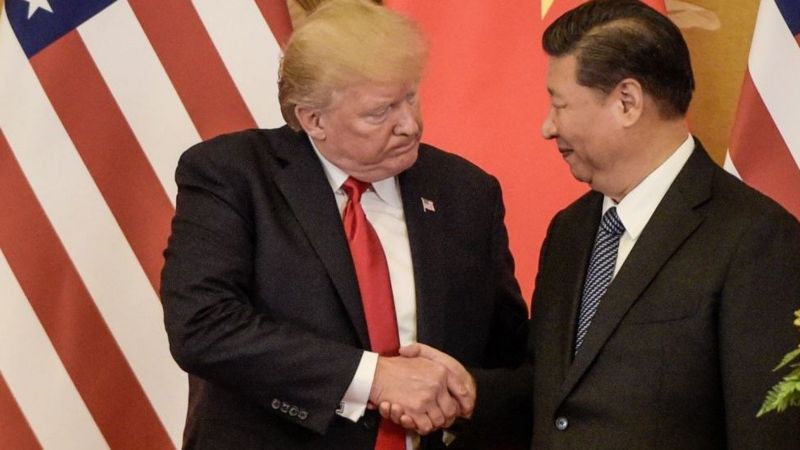 US President Donald Trump has a Chinese bank account and spent years pursuing business projects in the country, the New York Times has reported.

The account is controlled by Trump International Hotels Management and paid local taxes between 2013 and 2015.

It was set up "to explore the potential for hotel deals in Asia", according to a Trump spokesman.

Trump has been critical of US firms doing business in China and sparked a trade war between the two countries.

The NY Times revealed the account after obtaining Mr Trump's tax records, which included both personal and company financial details.

Mr Trump has been critical of presidential candidate rival Joe Biden and his policies towards China in the lead-up to the US election, taking place on 3 November.


The Trump administration has singled out Mr Biden's son Hunter and made unsubstantiated claims about his dealings with China. Joe Biden's income tax returns and public financial disclosures show no business dealings connected to China.

'Inactive' office
Alan Garten, a lawyer for the Trump Organisation, described the NY Times story as "pure speculation" and said that it made "incorrect assumptions".

He told the paper that Trump International Hotels Management had "opened an account with a Chinese bank having offices in the United States in order to pay the local taxes".

"No deals, transactions or other business activities ever materialised and, since 2015, the office has remained inactive,"  Garten said.

"Though the bank account remains open, it has never been used for any other purpose," he told the NY Times.

The US president has multiple business interests both in the US and overseas. These include golf courses in Scotland and Ireland and a chain of five-star luxury hotels.

'End our reliance on China'
In August, Mr Trump said he wanted to offer tax credits to entice US firms to move factories out of China.

He also threatened to strip government contracts from firms that continue to outsource work to China.

In a speech, Mr Trump vowed to create 10 million jobs in 10 months, saying "we will end our reliance on China".
In stark contrast, the NY Times report details how Mr Trump has been looking to land business in China. His efforts accelerated in 2012 with the opening of a Shanghai office.

The tax records it obtained show that he has invested at least $192,000 in five small companies created specifically to pursue projects in China over a number of years.

Those companies claimed at least $97,400 in business expenses since 2010, including some minor payments for taxes and accounting fees as recently as 2018.

But the US president's plans in China have been largely driven by Trump International Hotels Management, through direct ownership of THC China Development, according to the NY Times.

What is the latest on the US election?
With two weeks to go until the election,  Biden again remained off the trail on Tuesday as he prepared for the final presidential debate on Thursday. The Democrat maintained a steady lead in national opinion polls.

Trump, making his own pitch to the American people, again insisted the US was weathering the pandemic well - despite figures showing rising cases and hospitalisations in almost all states.

First Lady Melania Trump pulled out of a planned campaign appearance - a rally in Erie, Pennsylvania, with the president - because of lingering symptoms of her Covid-19 infection.

On Wednesday, former President Barack Obama will make his first campaign appearance for Mr Biden, holding a drive-in rally in Philadelphia, and President Trump will hold yet another rally himself, this time in Gastonia, North Carolina.