All BJMC jute mill workers to get arrears within Nov: Minister 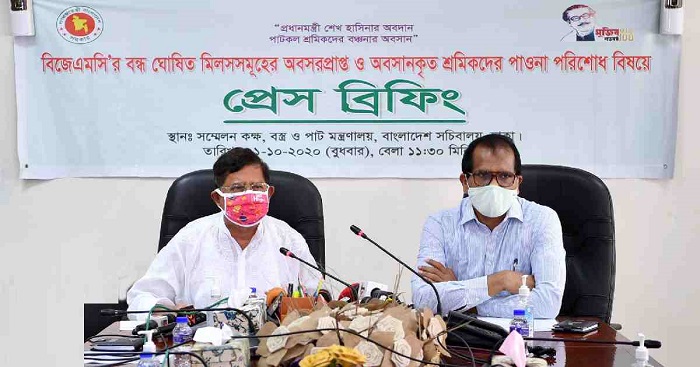 All workers of state-owned Bangladesh Jute Mills Corporation (BJMC) will get their arrears within November, assured Textiles and Jute Minister Golam Dastagir Gazi on Wednesday.

The Minister confirmed the matter in a press conference over paying dues of retired workers and others who lost their jobs at the secretariat.

“To pay the arrears of workers of 8 jute mills, we got Tk 1,790.52 crore from the Finance Department so far and gradually workers are being paid in their bank account and through saving certificates," he said.

The payment process of two more jute mills (Hafiz Jute mills of Chattogram and Eastern Jute mill of Khulna) will begin from Oct 25, the Minister said.

“Hopefully all jute mill workers will be paid all their arrears within next month.”, Gazi said.

The government has formed two bodies for providing recommendations to revive the jute industry by modernising and resuming the jute mills operations, he added.

Hopefully the closed jute mills will resume with new dimensions where experienced workers would get chance of employment, he said.

Earlier, the government shut down 25 state-run jute mills under BJMC by providing cent percent dues of some 25,000 workers of the mills.

Compensating the workers was stressed as a priority by the government while announcing the closure, with the country’s jute and textiles minister even claiming  a Tk 5,000-crore fund had been set aside expressly for this purpose.

The decision came at a meeting held with Prime Minister Sheikh Hasina in the chair at her residence Ganobhaban on July 2. The mills closed with immediate effect.

The government’s plan was to bring in private sector players who would oversee the reopening of the chronically loss-making mills as viable commercial entities. But that hasn’t found any takers yet either.