Cricketers strike: A mission yet to be accomplished 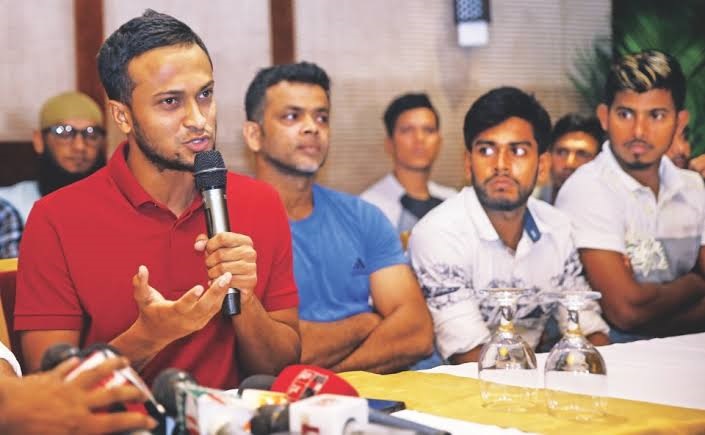 Bangladeshi cricketers unwilling to express their feeling regarding what they achieved only indicate one question- whether they could accomplish what they wanted through their strike.

Last year on this day (October21) the whole world and precisely Bangladesh cricket witnessed the most tumultuous day in their history after several cricketers gathered in front of the academy premises to raise their voice that literally stunned everyone from  spectators to journalist along with the common man.

One year passed since the whole cricket fraternity was rocked with a planned and organized protest by the top professional cricketers of the country and there is a wide discussion going around regarding what the cricketers of the country have achieved from the protest as they called for a strike until their 11-point demands and later it turned out to be 13 points demands while the cricketers were adamant to not take the field until those demands were met.

The strike was led by the leading cricketers of the Bangladesh national cricket team and in response Bangladesh Cricket Board President Nazmul Hasan reacted furiously to the event and had called the movement by the cricketers as a conspiracy to demolish the image of the cricket.

The strike lasted for three days following tussle between the board and the cricketers and it ended when the two major stake holders of the country met for a meeting late at night at the BCB board room.

It looked that both parties had reached a common ground that prompted the cricketers to call off the strike but looking into the list of demands achieved, majority are work in progress while there have been at least four of the demands that had almost zero progress.

The first demand by the cricketers was resignation of Cricketers Welfare Association of Bangladesh [CWAB] president and its general secretary along with demanding respect.

‘’We always respect them and I don't see any deterioration in our relationship with the players as they are the main stakeholders of the board. The board takes responsibility like a guardian. I don't think there was any gap between us. They had some issues, which we have addressed. The relationship between the players and board is always cordial,’’ said BCB chief executive Nizamuddin Chowdhury.

‘’We have kept all channels open, whichever medium they want to use [to communicate with us]. There's considerable player representation in the current board, [more] than ever before. By constitution, there is players' representation in the board. Players have access to everyone in the board. You very well know that our president has a personal relation with the players."

However there has been zero development to the demand given the cricketers never got back to CWAB on the issue following a meeting immediately after the strike.

"Within a month after their strike, we briefed the players including Shakib Al Hasan, about our association's constitution," Paul said. "Shakib told us that they will get back to us in three days, but they didn't get back to us for two weeks. They wanted another meeting but they only sent [Jahurul Islam] Omi. Shakib didn't come to the meeting,’’ said CWAB general secretary Debabrata Paul.

"But we have been in touch with the senior cricketers throughout the Covid-19 pandemic when we had online meetings about first-class cricketers. They have been quite active in five meetings so far. I would say that our relationship with the players is in better shape than at any point in time,’’ he said.

The players demanded to raise the match fee of first-class competition National Cricket League to Tk 1,00,000 and to improve accommodation, traveling, catering and other facilities.

Nizamuddin explained the reason citing that they opted not to increase to keep exclusivity.

“Central contract is a big thing for the cricketers. We believe there should be a good competition and only those who deserve should be named under the contract. The quality of the players will not improve if we start including them just for the sake of meeting the numbers. There should be a balance and we will try to maintain that,’’ said Nizamuddin.

One-day competition under the National Cricket League and a T20 competition for only locals ahead of Bangladesh Premier League T20 was demand number eight by the cricketers and the demand has been yet unattended. As per Nizamuddin, domestic competitions should be based of necessity.

“We had once held a second T20 tournament and this time it will be corporate league [in November]. It is not possible to have another domestic one-day tournament at the moment. National League once had one-day competition under it but we have to understand the timely demand. Which format is more important, how much value another one-day competition add, you have to understand that first,” Nizamuddin explained.

Another important demand of the cricketers was to sign individual contracts with clubs for the Dhaka Premier League rather than getting drafted through player-by-choice.

This demand was fulfilled by the board but it has now backfired for the players as the clubs are now reluctant to clear their dues for the coronavirus-hit season, which force shut the league after the first round.

Players demanded that the board should share its revenue with the both men and women cricketers- were ruled out by BCB president Nazmul a few days after the protest and it still remains the same. As per the board the model of revenue sharing is unrealistic in Bangladesh’s perspective.

Although not much have been achieved after one year since the protest by the Bangladesh cricketers, which had made headlines across the globe, a general feeling is that whatever that has been achieved is more than enough.