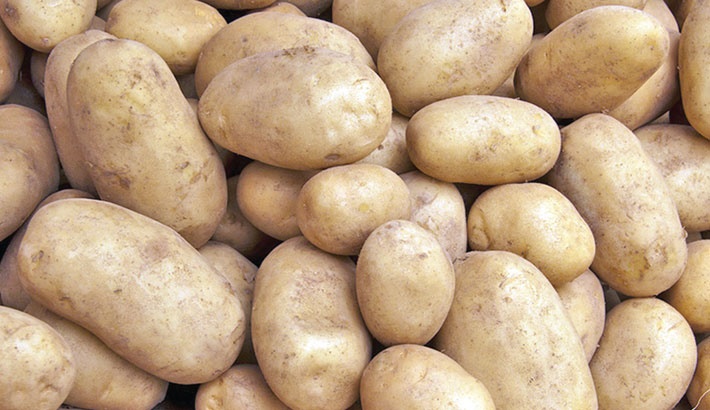 Potato has disappeared from the wholesale markets including Kawran Bazar in the capital at the dead of night amid a skyrocketing price of the item.

Though the government fixed potato price earlier at Tk 30 a kg, wholesalers are not happy with the government-fixed price. A syndicate has suspended the supply of potato to the wholesale shops, defying government instructions.

Director-General of the Department of Agricultural Marketing (DAM) Mohammad Yusuf came up with the information after a meeting with the representatives of cold storage owners, wholesale traders and concern government agencies on the day at DAM office.

The DAM organised the meeting following supply shortage of potato in the markets as traders were reluctant to sell the item as the previously-fixed rate.

Bangladesh Cold Storage Association (BCSA) president Md Mosharraf Hossain was present at the meeting, among others.

Potato price has increased in the market at a time when the lower and middle-income groups are suffering from a fall in income and price spiral of essential commodities like rice, oil and vegetables amid the flood and Covid-19 pandemic.

The price skyrocketed by 111 per cent from last year, according to Trading Corporation Of Bangladesh (TCB).

Potato was selling at Tk 50 per kg in the capital on Tuesday from Tk 26 a kg a month ago and Tk 20 per kg three months ago.

Many consumers believe that a lack of monitoring by the authorities concerned has paved the way for price manipulation of many essential items.

The Department of Agricultural Marketing (DAM) of the agriculture ministry has fixed potato prices at Tk 25 per kg at the wholesale level and Tk 23 per kg at cold storage stage and Tk 30 for retail level.

But, no reflection of the fixed-price was seen in the kitchen markets till now. The government also intensified mobile court drives but the wholesalers suspended their sell fearing the drive.

“Potato cultivation has decreased slightly this year as the farmers did not get fair price of potato last year,” said the minister.

“A rise in potato price will create a catastrophic situation for the consumers, especially low-income people.”

“In an open market economy, we can’t control the market in that way. I have always believed that the market can never be controlled by the army, police and armed forces. It is very difficult to control the market without increasing supply. We can monitor, we can push. If you do something unusual, action can be taken there,” said the minister.

He said, “Higher potato export, use of potato as aids for Rohingya and the Covid-19 pandemic contributed to a supply crunch of the item. Surging vegetable prices also have led to an increased demand for potatoes.”

“But, the volume of potatoes in stock is much higher, there is no chance of the price going up to Tk 50 kg,” he said.