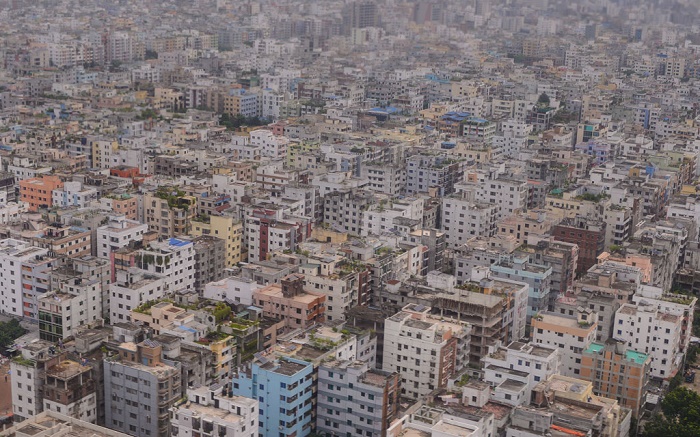 Planners on Tuesday said that the development of the capital is detracted by the Dhaka Building Construction Rules, 2008 which ignores density considerations and carrying capacity of different areas based on respective infrastructure and community facilities.

They said that the Dhaka Building Construction Rules, 2008 led the development of the capital to wrong track because it set equal and high Floor Area Ratio for the whole span of the city. High density of population leads the country to the bottom of livability list.

Planners of Bangladesh Institute of Planners made the remark at an online press conference.

They said that population density in different areas of the capital including Lalbag and Chawkbazar surpassed many cities of Europe as it has passed 600-700 persons per acre leading to insufficiency of civic amenities.

Speaking on the occasion general secretary of BIP Adil Mohammed Khan said, “The FAR standard led Dhaka as densely populated and unmanageable city. The policymakers had no depth knowledge about FAR can result insufficiency of civic services, including transport system, water, gas and electricity for the high density of population.”

“For the implementation of land use planning, transport planning and drainage planning proper funding and institutional capacity is now crying need. If we cannot implement the plans we have to revolve around the problem,” he added.

President of BIP Akhter Mahmud, “For development control and management, it is the effective step to make a population density map and set area based social and civic services and allow infrastructure as per. The development permission has to be given as per the ratio. The policy will be adopted prioritizing sustainable development of the city in mind, not for individual or vested interest.”

Former vice-president of BIP Fazle Reza Sumon said, “Earlier while preparing plan, making law and regulation, population density is not given much importance and for the transport and drainage system have collapsed. For offering sustainable and healthy cities for the future generation, we have to set the standard of livability and follow the practice of population zoning in the planning of cities and urban areas.”