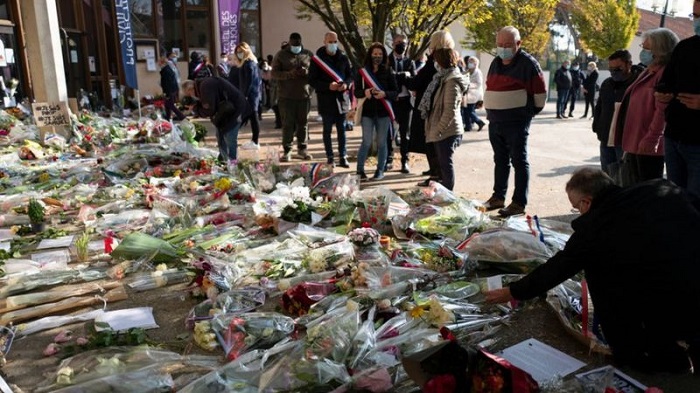 French police have raided the homes of dozens of suspected Islamic radicals following the beheading of a teacher who showed controversial cartoons of Prophet Muhammad to his pupils.

Some of those being questioned are believed to have posted messages of support for the killer of Samuel Paty.

The government also said it was investigating 51 French Muslim associations.

On Monday, Interior Minister Gerard Darmanin said some of the Muslim associations would be shut down. He said the operations sent a message that there was "no respite for enemies of the republic", and that they were expected to continue all week.

Meanwhile, around 80 people would be interviewed by police, Mr Darmanin added.

Some are believed to have posted messages in support of Mr Paty's killer while others are from associations - such as the Collective Against Islamophobia - that the government believes propagate a permanent message of defiance to the French state.

On its website, the collective describes itself as a "human rights organisation whose mission is to combat Islamophobia" that partners with the United Nations among other institutions.

Mr Paty was murdered in the Paris suburb Conflans-Sainte-Honorine. An 18-year-old born in Moscow of Chechen origin was shot dead by police on Friday.

What's the latest in the investigation?

Anti-terrorism Prosecutor Jean-François Ricard said Mr Paty had been the target of threats since he showed the cartoons of the Prophet Muhammad during a class about freedom of speech.

As he had done in similar lessons in recent years, Mr Paty, a history and geography teacher, advised Muslim students to look away if they thought they might be offended.

Depictions of Prophet Muhammad can cause serious offence to Muslims because Islamic tradition explicitly forbids images of Muhammad and Allah.

The issue is particularly sensitive in France because of the famous publishing of cartoons of Prophet Muhammad by satirical magazine Charlie Hebdo. A trial is currently underway over the killing of 12 people by Islamist extremists at the magazine offices in 2015.

Some French-Muslims say they are frequent targets of racism and discrimination because of their faith - an issue that has long caused tension in the country.

Eleven people have been arrested as part of the police investigation into Mr Paty's murder. No more information on the arrests is available.

What has the reaction been in France?

The attack has shocked and horrified France. Thousands gathered at weekend rallies to honour Mr Paty with people carrying placards reading "Je suis enseignant" (I am a teacher).

At the Place de la République in Paris, one person carried a sign saying "zero tolerance to all enemies of the Republic". Another person's placard said, "I am a professor. I'm thinking of you, Samuel."

President Emmanuel Macron said the attack bore all the hallmarks of an "Islamist terrorist attack" and the teacher had been murdered because he "taught freedom of expression".

Islamists would not be allowed to sleep quietly in France, Mr Macron was quoted as saying in a cabinet meeting on Sunday.

In addition to Sunday's demonstrations, there will be a national tribute paid to Mr Paty on Wednesday.

What happened on Friday?

Mr Ricard said that the suspect, who lived in the Normandy town of Évreux, about 100km (60 miles) from the murder scene, went to Mr Paty's school in Conflans-Sainte-Honorine on Friday afternoon and asked students to point out the teacher.

The suspect had no apparent connection with the teacher or the school.

He followed Mr Paty as he walked home from work. The suspect used a knife to attack the teacher in the head, and then beheaded him.

Witnesses are said to have heard the attacker shout "Allahu Akbar", or "God is Greatest".

As police approached him, he fired at them with an airgun. Officers returned fire, hitting him nine times. A 30cm-long (12in) blade was found close by.

Authorities said the man had been before courts but only on minor misdemeanour charges.