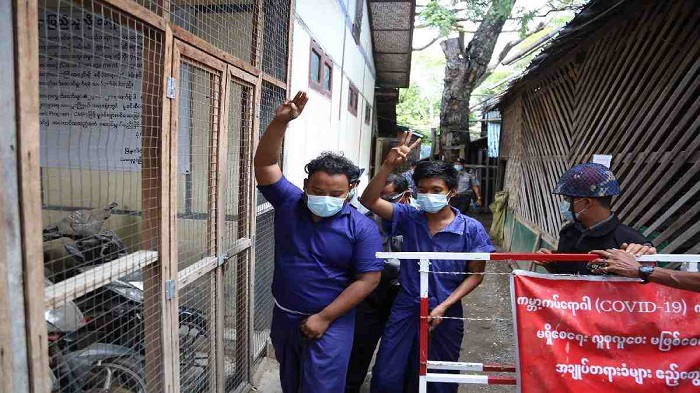 Since September 11, Myanmar authorities arbitrarily detained 15 human rights defenders, including 14 members of the All Burma Federation of Student Unions (ABFSU), for protesting the government and the ongoing war in Rakhine and Chin states.

Between October 2 to 9, courts in Mandalay Region sentenced two ABFSU members to five years in prison, one to one year in prison, and another to one month with hard labor, all for their involvement in legitimate, peaceful activities.

At least nine of the other detained protesters are scheduled to appear before the Chan Aye Thar-Zan Township Court in Mandalay on October 22.

“The crackdown is aimed at incapacitating and silencing human rights defenders and student activists. The charges should be dropped, and the Myanmar Government should free all political prisoners immediately.”

The four convicted ABFSU members and at least four of the other detained protesters are currently imprisoned in Obo Prison in Mandalay Region.

According to ABFSU—a nationwide student organization with a long history of political activism—at least 16 of its members are currently in hiding.

The arrests appear to be in response to an anti-war leaflets and poster campaign launched by ABFSU in Mandalay in early September.

For example, on September 11, the day after protesters distributed anti-war material in the Zay Cho Market, Yadanabon University, around the Mandalay moat, and elsewhere in Mandalay, Chan Aye Thar-Zan Township police in Mandalay briefly detained and charged ABFSU member Myo Chit Zaw, 21, and filed charges against 12 others for failing to notify the authorities in advance of the September 10 protest.

Despite the arrests, between September 11 and October 9, ABFSU members continued to conduct more than 12 leafleting and poster campaign activities in townships throughout Mandalay and in other regions.

ABFSU members distributed material with slogans saying, "Oppose murderous fascism" and "Dictatorships must fail" and calling for the government to lift mobile internet restrictions in Rakhine and Chin states, where the Myanmar Army and Arakan Army are engaged in an ongoing armed conflict.