25 injured as police clash with Jute workers in Khulna 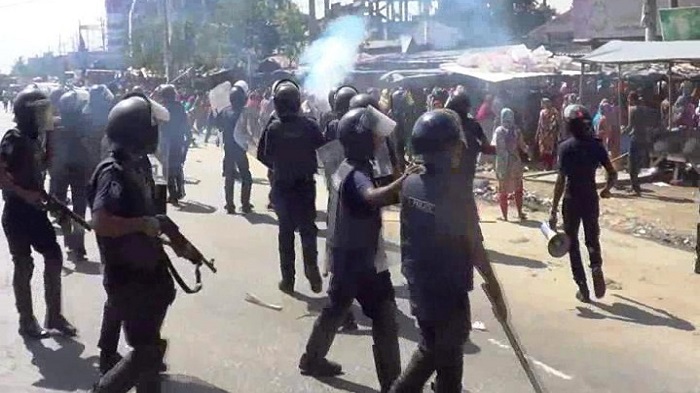 At least 25 people, including three policemen, were injured as jute mill workers locked into a clash with police on Khulna-Jashore highway on Monday.

Around 1,000 former workers of Khulna and Jashore jute industrial belt under the banner of Sammilito Nagorik Parishad blocked the road at around 11:00am to press home their 14-point demand including reopening of 25 jute mills, modernisation of the jute mills and payment of arrears for all the workers.

Police at first tried to negotiate with the workers but when the agitated workers rejected the negotiation, the policemen charged batons and fired teargas shells to disperse them from the road, leaving 20 to 22 of the workers injured.

At one stage, the demonstrators hurled brick chips at the law enforcers, leaving three of the policemen also injured.

Confirming the news, Deputy Commissioner (DC-north) Mollah Zahangir Hossain, said the law enforcers managed to disperse them from the highway and took control over the situation.